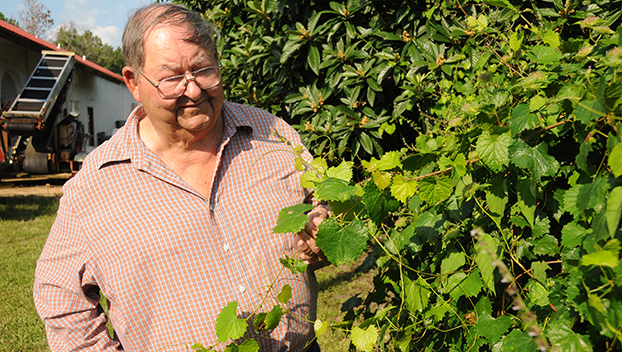 Lt. Col. Jim Eddins’ story will live on in those who knew and love him.

Eddins, 88, passed away on Oct. 15, 2021, at his Perdido home, near where his muscodine wine vineyard sits in a plot in north Baldwin County.

Perdido Vineyards — which was founded in 1972 and was Alabama’s first farm winery since prohibition — is one of many visions that came to fruition from the heart of Eddins.

“I don’t think right now that any of us know what his legacy will be or the full impact of his loss will be,” Perdido Vineyards Director of Marketing Sherri Clay said. “Even though he was a fighter, he was a lover. He was a kind, loving and giving person.”

Eddins graduated from Escambia County High School in 1950. He then went to Marion Military Institute and was selected to attend the United States Navel Academy in Annapolis, Md., where he graduated as a second lieutenant  in the Marine Corps. He served active duty for eight years before joining the Marine Corps Reserve. He rose to the rank of lieutenant colonel before retiring.

Eddins’ military career, which spanned more than 30 years, included serving with teh Presidential Security Force at the Marine Corps Barracks in Washington, D.C., and two commanding officer assignments with the corps reserve units in Mobile.

Col. Charles Jackson, who served under Eddins, said his friend was a forward thinker.

“He was definitely a positive thinker,” Jackson said. “He always had a positive attitude. He was actually a very distinguished marine most people don’t know about.”

Jackson said while in Washington, Eddins was an escort for President Dwight D. Eisenhower and served on the presidential guard for President John F. Kennedy.

“They (the presidential guard) considered themselves the elite, and Jim Eddins truly was,” Jackson said. “He was an engineer. We have different fields in the Marine Corps, whether it be in the infantry, as an aviator, artillery; and we have motor transport marines and engineering marines. That was Jim’s specialty — engineering. He used those skills after he got out of the Marine Corps, and worked several years with IBM before moving back to Baldwin County.”

While working at IBM, Eddins met his late wife, Marianne, and married in 1968. In fact, one of his award-winning muscodine wines is named after her.

Jackson said Eddins got the commanding officer’s job in Mobile because of his Naval Academy background.

“He was very positive, and I saw that often,” Jackson said. “I helped him when we were planning Perdido Vineyards. I used to spend one weekend going to military meetings, and going with him during one or two weekends we were putting down post holes at the vineyard.”

Jackson said he saw Eddins during his final days, adding he was glad to do so.

“We made amphibious landings together, we have swam conditioning together, and he was just an amazing individual,” Jackson said. “He is a true warrior. I told him before I left him, the last Monday night before he did, I said, ‘Now, colonel, if I don’t see you before this weekend, you just know that I love you.’

“His last famous quote was that he pointed at his Bible over on his dresser, and said, ‘The God of the Bible would not send him to hell for making all of the wine he had made,’” he quipped.

From the vineyard, Eddins helped produce several wine vintages, vinegars and other products. Early on in his career as a wine producer, he built one of the first ever machine pickers in the southeast.

Longtime neighbor and employee at Perdido Vineyards Kathy McMahon said Eddins is to exceptional to put into a very few words.

“Between agriculture, engineering and building the first picker in the southeast; every time he opens his mouth, you learn something more important that you had no clue on,” McMahon said.

McMahon said Eddins had a deep knowledge of computers, and helped pilots gauge how far above the surface level they were in the air. Additionally, he developed instruments that recorded what was happening in the atmosphere.

Eddins was often quoted as saying that the earth itself is a massive steam engine.

Atmore Resident Randy Nichols, a storyteller in his own right, has a personal connection with Eddins as Marianne worked for him, or as he put it, “I pretty much worked for her.”

“Col. Eddins’ father, Cliff Eddins, owned Cliff’s Landing on the Tensaw River back in the day,” Nichols said. “Cliff’s Landing is now owned by the state. With Col. Eddins partially growing up at Cliff’s Landing, he had a lot of great sotries from that time in his life, including stories of the old ‘Ghost Fleet’ that was moored in the Mobile-Tensaw Delta after World War II up until the early 1970s.”

Nichols said a story that sticks with him is when Eddins was a guard for Eisenhower.

“He said Mamie Eisenhower was always giving little garden parties for the wives of various dignitaries, and they always included a little band,” Nichols said. “Col. Eddins said that Mrs. Eisenhower absolutely loved the marines because the ‘Little Ladies’ at her parties would get into the hooch pretty good after about an hour, and all the marines knew how to dance, and dance they would. In Mrs. Eisenhower’s eyes they (the marines) could do no wrong.”

Nichols, who said Eddins loved a good fight, especially with the Alabama Beverage Control Board when given the chance, helped him in a time of need. Some two years ago, Nichols’ son, Gordon, passed away in a car wreck. Eddins’ wife passed away the same year.

“After our loss of Gordon, Col. Eddins really reached out to me,” Nichols said. “He knew Gordon from birth, and always took up a lot of time with him, and Gordon loved the man. Gordon’s mind was like a sponge, especially when it came to off color stories and sayings. Therefore, Gordon put all he heard from Col. Eddins in the back of his mind, and used them at the proper and appropriate times in social settings, but certainly not in mixed company.”

“Our visits truly gained new meaning after Gordon’s tragedy and Col. Eddins loss of wife, Marianne, a couple years ago,” he said. “If I had to capsulate Col. Jim Eddins in my mind, if such is remotely possible, it would be that he was a complicated simple man from rural south Alabama. He considered himself an old school Democrat, but would support Republicans on a regular basis when needed.

“He was certainly funny, always entertaining, a storyteller of the highest degree, highly intelligent and a true patriot,” he said. “He was just an interesting character that never bored you. He was my friend and an old dear friend of my entire family. He was truly one of a kind, and I will miss him greatly.”

Jackson said Eddins asked him to get his dress uniform ready, which he did, with honor. He added Eddins was never the boss, he was the owner of the vineyard.

“He is the very tail end of the greatest generation of the country,” Jackson said. “It’s the baby boomers that lost this country. He fought to the very end. His last battle was that a man does not lose his rights just because he gets COVID and gets assigned to a nursing home. I called him and tried to speak to him and got word to me he was being held hostage and I needed to come and rescue him. Let’s just say I helped make it happen. They took him home so he could celebrate his birthday at home.”

When asked what Eddins’ legacy will be, Clay said it’ll be centered around him being a wine pioneer.

“He definitely pioneered the way for not just wine, but other distilleries and breweries, too,” Clay said. “He was a fighter. Sure, it probably helped he was in the Marine Corps and a lieutenant colonel. He didn’t back down from anything. He said his wife used to say, ‘You’re always looking for a fight.’ He said, ‘No, I‘m not. I’m not going to back down from one.’”

A public viewing for Eddins will be held tomorrow, Wed., Nov. 3, from 3 p.m. until 7 p.m. at Petty Funeral Homes LLC.