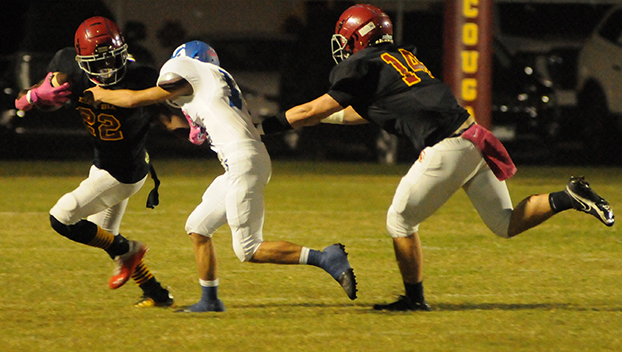 A rigorous summer workout schedule for Escambia Academy is reaping its own rewards as the Cougars haven’t let up this season as they prepare for the first round of the AISA Class 2A state playoffs.

The Cougars face Edgewood tomorrow night at home in the first round. On their side of the bracket, EA could face Chambers Academy next week if they win tomorrow. Chambers, the No. 1 seed from Region 1, would have to beat Wilcox Academy, a No. 4 seed to advance.

During the broiling summer months, EA had a workout plan and stuck with it.

Rayvon Barnes, Brady Howell and Bubba Nettles, who coaches said benefited the most from the program, said the day always started on the track.

“We’d go to the track and then weight lift,” Nettles said. “For wide receivers, running backs and quarterbacks, we’d do 7 on 7 stuff. After that, we ran.”

Barnes said at the beginning of the summer, the team came and worked out twice a day – once in the morning and once in the evening.

“It wasn’t very fun, but for a couple of weeks, it was rought but it got better as it went along,” Barnes said.

Howell said about a month into the workout program, that’s when they started feeling in shape, however.

“Most of the time and as soon as we got used to it, the intensity at workouts would ramp up,” Howell said.

In regard to diet, all three said if you eat and drink wrong, you’re going to feel it when you run.

Nettles said he tried not to eat much in the morning, but kept his fluid intake up.

“Being in the sun a lot, you drink a lot of water,” Barnes said.

All three said they stayed away from cokes and other sugary-sweet drinks, sticking to water and Gatorade.

When asked how the summer workout program helped them during the season, they said it’s showed out against teams.

“Most of us play both ways even though we aren’t a huge team,” Howell said. “That basically helped us play the whole game.”

Barnes said he noticed a lot of opponent players cramping or going down, and they were still at “100 percent.”

On the season so far, the Cougars’ only loss came at the hands of rival Autauga Academy.

The loss helped the team as a whole, all three said.

“We’ve had our ups and downs,” Nettles said. “We started off well. It hurt us losing to Autaug. I think it helped us in the end to get our minds right. Since that game, we’ve had better practices and everybody’s been more focused.

“If we didn’t have the summer we had, we wouldn’t be where we are at right now,” he said.