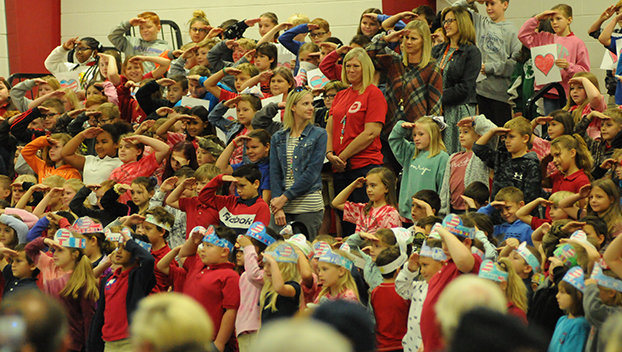 “What is a veteran?”

Riehm interacted with the students who attended the event, asking them what Veterans Day means. Veterans Day began on Nov. 11, 1919 and was known as Armistice Day, which was a treaty to end World War I.

Riehm then asked the students to name some wars that were fought after World War I, adding that some of the veterans in the audience fought in some of them.

“They did it. These are your parents, grandparents, your uncles, aunts and cousins,” Riehm said about the veterans present. “I want you to think about them and watch them.”

Riehm said a veteran is a volunteer.

“He or she is somebody who of their own free will comes up and raises their hand to defend the constitution against all enemies foreign and domestic,” he said. “They defend freedom, our rights and will protect us.”

“Think about how great they are,” he said. “These are people who advanced on the beaches at Normandy, where the Germans were up firing down on the artillery with machine guns. Ninety percent of the troops died. It was the same thing fighting in Korea. It was a terrible war. It was bitter cold. They were outnumbered, but were courageous and brave.”

Riehm said what makes the salute to veterans program special is it is exactly what veterans fought for.

“You’re doing exactly what they wanted,” he said. “They wanted us to be free and safe so you can have a good school, and come to an assembly here. This is actually the perfect circule of why they serve is to come here and see their children and grandchildren growing up free.

“Veterans Day is celebrating those that serve,” he said. “It’s all about service and sacrifice. They did that for each and every one of you.”

Principal Phillip Stewart opened the program by reminding those in attendance that this was a way to say thank you to veterans.

The “National Anthem” was sung by Jacob Ziegler; a patriots pen essay was read; and music was provided by the PMS band.

Each armed force was recognized by medley, and the POW/MIA table was read.