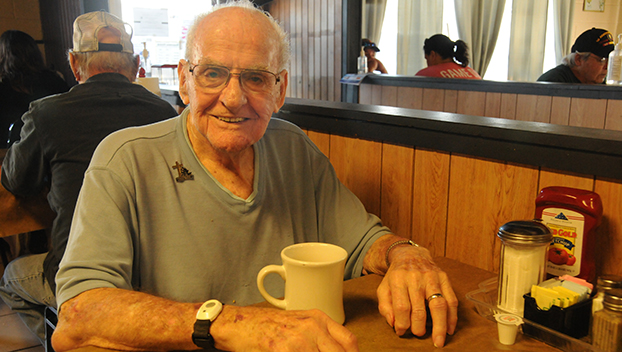 Atmore resident and U.S. Navy Veteran Lamar Fillingim has quite a story to tell.

Fillingim, who was enjoying a coffee at Anchor Cafe this morning as a part of the Atmore VFW Post No. 7016’s Veterans Day Breakfast, said he he served on the first ship that fire the first shot of the Korean War.

Fillingim said the ship, U.S.S. Juneau, was an antiaircraft cruiser. He said the guns that were fired were 5-inch/38-caliber and 3-inch/50-caliber guns.

He said when the first shots were fired, two to three ships were blown up, and then the ship moved on down the Korean Coast.

Fillingim served four years during the war, and it was a long four years, he said.

After the war, Fillingim came back to Pensacola, Fla., where he was born and raised. He worked for the Naval Air Station Pensacola for a number of years, and moved to Atmore to be closer to his daughter.