ON TO THE CHAMPIONSHIP 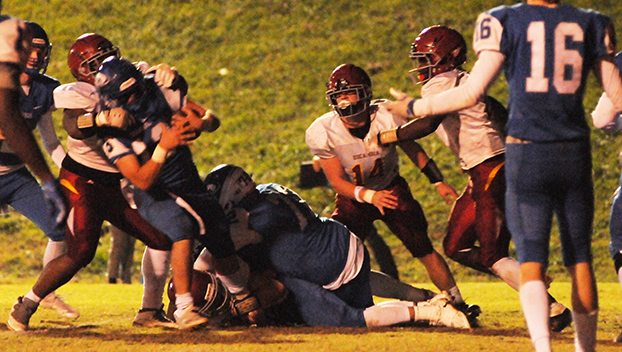 Escambia Academy's Kanye Hooks makes a stop as the clock winds down the first half tonight. | Andrew Garner/Atmore Advance

The Cougars mounted a stellar first-half on both sides of the ball.

EA quarterback Landon Sims and running back Bubba Nettles scored two touchdowns each in the first half, and the Cougars held a 28-7 lead at halftime.

“We came out knowing what we had to do,” EA head football coach Hugh Fountain said. “We came out and played so well in the first half. They got after it. In the last four to five games, they’ve been working in the right direction and tonight it came to fruition for us.”

The second half was much the same as Sims caught an interception, and a short time later, the Cougars went up big after a 6-yard touchdown reception by Malaki Haynes. Additionally, Nettles got himself an interception reception on Chambers’ next offensive possession.

Fountain said the boys couldn’t have played no better.

In the last six years, the Rebels hadn’t lost a playoff game until Friday night, and Fountain said it was a tall task to overcome.

A complete story will be in Wednesday’s edition of The Atmore Advance.