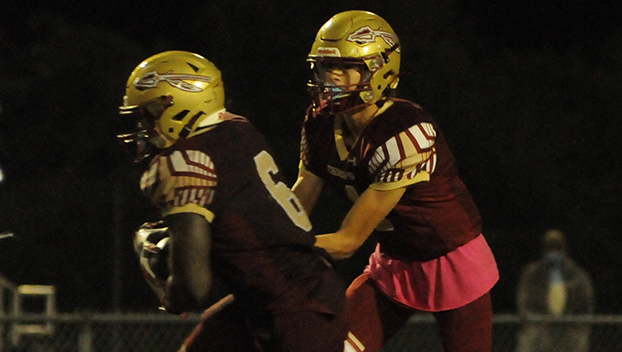 Northview ended its season tonight as the Chiefs fell 46-35 to rival Baker, Fla. in the FHSAA Class 1A regional semifinal on the road.

Chiefs head football coach Wes Summerford said he thought that the team had chances and opportunities in the game, but turnovers proved costly.

“It was hard to stop them at times, but we still had opportunities,” Summerford said. “Some of the turnovers were timely. I think that was the story of the game.”

Summerford said the game was close at times, and the Chiefs had an opportunity to go down and score to tie the ball game, however, he noted that the team fumbled on that drive.

Late in the game, NHS could’ve folded, but it didn’t.

The Chiefs got a late kickoff return for a touchdown to narrow the lead to 11 points with some 37 seconds left in the contest.

Summerford said the touchdown return is just an example of how the kids fought in spite of the score.

The coach said this group of kids worked hard all season.

“It wasn’t a big group, but we got a lot out of them,” he said. “We depended heavily on those guys.”

Summerford said the crowd was great, and they showed up as promised.

“The community came out and did a great job cheering for us,” he said. “It was an awesome 1A experience.”