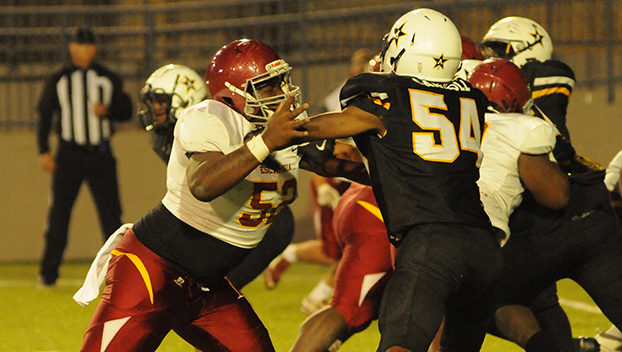 MONTGOMERY — Battles, no matter how hard they’re fought, are either won or lost on the field.

Escambia Academy battled tough with Autauga Academy, but fell 52-35 today in the 2021 AISA Class 2A state championship at Cramton Bowl.

The Cougars fell behind early in the first quarter, brought the game back to within single digits in the second and fought to keep the game close in the second half.

EA quarterback Landon Sims accounted for five touchdowns — four in the air — in the contest.

Scoring plays by quarter are below:

Autauga’s Karl Ligon scored on a 4-yarder with 9:14. The 2-point conversion was no good.

EA bounced back after getting back on offense on an interception catch by Sims.

From there, Sims found Maliki Haynes on a big play that led to a 12-yard touchdown pass to Jacob Lee with 7:25 left. The Cougars trailed 12-7.

The Generals answered on their next possession, driving the field to end in a 1-yard Ligon touchdown rush to make it 19-7.

The Cougars had an answer on their next offensive play as running back Bubba Nettles completed an 80-yard touchdown pass from Sims with 3:27 left in the opening half.

AA then hit a late touchdown on a 12-yard pass to Palmer from Rose to take a 26-14 lead at the break.

To start the second half, EA began utilizing its passing attack.

From there, Sims found Brady Howell on a 17-yard touchdown pass with 8:19 left and on fourth down. With the extra point, the Cougars cut the lead to 26-21.

The Cougars played with new hope a short time later as Sims caught an interception from rose with 4:59.

However, EA couldn’t get anything to go and AA took over less than a minute later.

From there, Rose found Jaylen Anderson on a 35-yard touchdown pass with 3:57 and the PAT was blocked.

EA answered on a Sims to Howell 33-yard touchdown throw some 3 minutes later to make it 39-27.

The Cougars got the onside kick, but got a turnover with 6:43 to dash any hopes of a comeback.

Sims then added another touchdown and with the 2-point conversion, the Cougars trailed 45-35.

Ligon then added a 56-yard touchdown run with 2:14 left to put the game away for good.

Rose was 10-of-23 for 260 yards with four touchdowns and an interception. He added 38 yards on the ground and one TD.

Ligon rushed for 161 yards on 28 carries and scored three touchdowns.

Palmer had four receptions for 127 yards and two touchdowns.

Nettles added 115 yards on 14 carries and a touchdown.

Howell had four receptions for 78 yards and a touchdown.