Cheaha State Park in Delta, Alabama, will soon become the final resting place for the ashes of retired American flags no longer fit for service. A flag interment ceremony at the newly constructed Old Glory Lookout within the park will be held on December 7, 2021. The event will take place near the park’s Bald Rock Boardwalk at 11 a.m. The public and media are invited to attend. 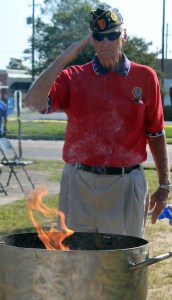 The Old Glory Lookout vault is a collaboration between Cheaha State Park and the Billy Glenn Rushing Post 90 of the American Legion in Atmore, Alabama. The facility consists of a steel vault encased in native Cheaha quartzite that was cut by hand almost 100 years ago by the Civilian Conservation Corps (CCC). The vault is located on the eastern slope of the ridge near Bald Rock overlooking the valley below.

The project was initiated by Post 90 Commander Dave Graham, who had a vision to create a sanctioned location in Alabama as the final resting place for the ashes of retired American flags.

“The dream to construct a place that would remain undisturbed and serve as a location for various military, veteran and civic organizations in Alabama to inter the ashes of retired flags with dignity and honor is now a reality,” said Paul Chason, Adjutant for Post 90. “We believe it is the first of its kind in America.”

The flag of the United States, also known as Old Glory, has stood as a symbol of freedom since 1777, and its design encompasses both the nation’s history and patriotic ideals. According to the U.S. Flag Code, “The flag, when it is in such condition that it is no longer a fitting emblem for display, should be destroyed in a dignified way, preferably by burning.”

On the 20th anniversary of 9/11, members of the Atmore, Alabama, police and fire departments, along with members of the Veterans of Foreign Wars (VFW) Post 7016 and American Legion Post 90, held a flag retirement ceremony to remember the first responders and citizens who lost their lives on September 11, 2001. The flags retired during that ceremony will serve as the first ashes to be interred at the Old Glory Lookout within Cheaha State Park on December 7.

“The remains of these retired American flags will rest undisturbed on Alabama’s highest mountaintop and greet the rising sun each day,” said Chris Blankenship, ADCNR Commissioner. “They serve as a reminder to honor the past and embrace the future. We are honored that Cheaha State Park was chosen to be the home of this important facility.”

“We are proud of our parks system staff for their strong history of supporting our nation’s service members,” said Greg Lein, Alabama State Parks Director. “Cheaha staff did an excellent job assisting the American Legion Post 90 in the creation of the Old Glory Lookout.”