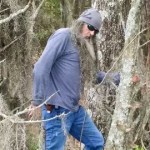 He was born on Feb. 26, 1969 to MacArthur and Nancy Grissett Davis in Atmore.

He is preceded in death by his father, MacArthur Davis; and his grandparents, William ”Bill” and Mary Grissett and Mitchell and Pauline Davis.

A memorial service will be held this Fri., Dec. 3, 2021 at 2 p.m. at New Bethlehem Baptist Church in Barnett Crossroads with Speaker Scott Harwell officiating.

An inturnment will follow at New Bethlehem Baptist Church Cemetery with Masonic Honors.