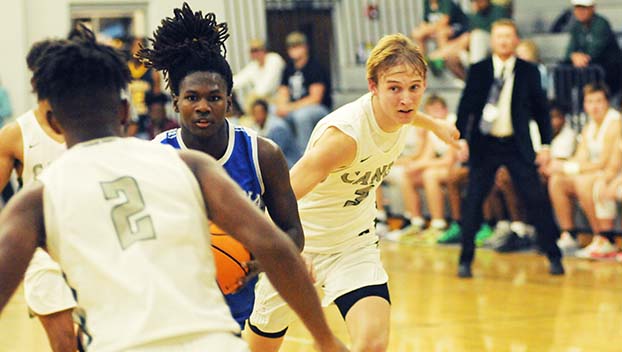 Escambia County's Conner McPherson was one of three Blue Devils who finished in double figures on Dec. 3. | Andrew Garner/Atmore Advance

Escambia County’s Sheldon Williams, Cee McPherson and Hakeem Johnson finished in double figures to help lead the Blue Devils to a 60-49 victory over Flomaton tonight just up the road.

Williams led ECHS with 30 pionts; McPherson added 14; and Johnson chipped in 11 in the winning effort.

The Hurricanes and Blue Devils played closed in the opening period, and were tied at 15-all going into the second.

Kaiden Arnold got a putback to give ECHS a 19-15 lead. Terrence McNeil hit McPherson on a nice pass a short time later, and Johnson got a 3-pointer to end a 9-0 run.

Flomaton utilized a solid passing attack, and played hard throughout the game.

A short time later, M. Adams hit Q. Odom for a dunk, and Odom later answered with another dunk to notch it at 28-19.

Williams made free throws down the stretch to give ECHS a 32-25 lead at halftime.

Midway through the third, Williams made the play of the game at the 4:32 mark. He dribbled left, drove the baseline and dunked to help give Atmore a healthy margin.

The Hurricanes answered with a 3-pointer by D. Averette and a jumper from J.H. Steele to cut it to 40-35.

McPherson then answered with a trey of his own.

Johnson helped the margin a short time later with a 3-pointer, and ECHS led 47-41 going into the fourth period.

Williams hit a rebound and putback, a turnaround jumper and scored against double coverage in the deciding period.

The Lady Blue Devils and Lady Hurricanes played close in the first period. EChS led 39-28 at the break, and 48-39 at the end of the third period,

At present, ECHS is 7-0 overall on the season.

ECHS is back in action next Mon., Dec. 6, at Monroe County.