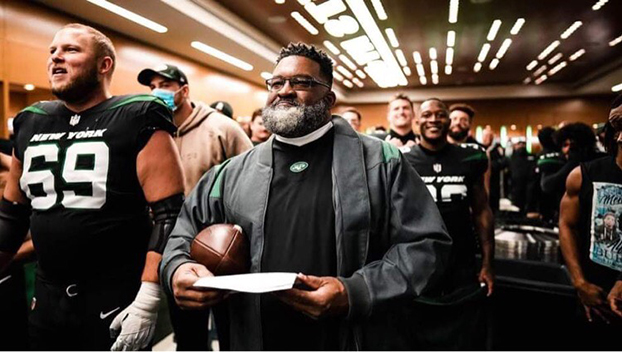 Atmore native and New York Jets acting head coach Ron Middleton got his first win as a head coach in the NFL after a 26-21 victory over Jacksonville on Sunday.

Middleton, who is the Jets’ tight ends coach, was coaching for head coach Robert Saleh, who didn’t clear protocols after testing positive earlier in the week, according to the Associated Press. According to AP, the Jets had 20 players on the COVID-19 list.

“It was just the culmination of the week, everybody being professional, everybody going about their job with all the adversity,” Middleton said.

“It was an awesome win.”

Middleton was given the game ball by his team after the victory.

This is Middleton’s first season with the Jets as he joined Saleh’s staff in January 2021. He played at tight end in the NFL for 10 seasons with stints at Atlanta, Cleveland, Washington, Los Angeles and San Diego.

Middleton has coached at Troy University, Ole Miss, Tampa Bay, the University of Alabama, Duke University, Jacksonville and the Jets.

Middleton graduated from Auburn University with a degree in pre-law/history in 1988, and received a master’s degree in sports and fitness management from Troy some 10 years later.

He is married to Kalita, and the couple has four children, Desmon, Ron II, Zaria and Mariah.