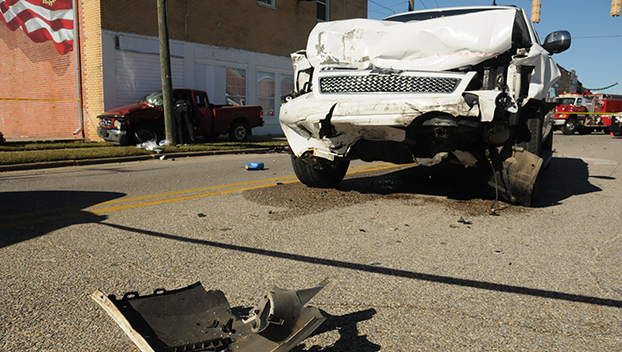 Two were injured and one was arrested after a two-vehicle crash occurred at the intersection of South Main and Church Streets on Dec. 23, according to the Atmore Police Department.

Chief Chuck Brooks said the APD received a call on Dec. 22 from Walmart in reference to a theft.

“When officers arrived, the suspec thad left the area,” he siad. “On the (Dec.) 23rd, Walmart called back and said the suspect was back in Walmart. Officers, when they arrived, they saw him leaving in a white (Chevrolet) Avalanche.

“They attempted to pull him over, and then the guy fled,” he said. “He was driving very erratic and at a very high speed.”

Brooks said the officers pursued the suspect until they got to Howard Street, where traffice was quite congested. He said they terminated the chase right then, but the suspect continued to go at a high rate of speed.

“Once he got to Church Street, he ran into the vehicle occupied by two people,” Brooks said.

Brooks said the other vehicle, which was a red Ford Ranger, was occupied by Andy Moye, 62, of Flomaton, and Donna T.G. Moye, 48.

Brooks said both victims are still in a medical facility in Florida.

Brooks said when the crash occurred, the offendant – a Joseph A. Weese, 33, of Frost Proof, Fla. – attempted to flee on foot and was apprehended a short distance from the crash site.

Brooks said Weese has been charged with assault I.

After the crash occurred, the northbound and southbound lanes of Main Street were closed for some four hours as Alabama State Troopers investigated the crash.

Atmore Fire Department and MedStar also responded to the crash.