James retiring from WEU after 43 years 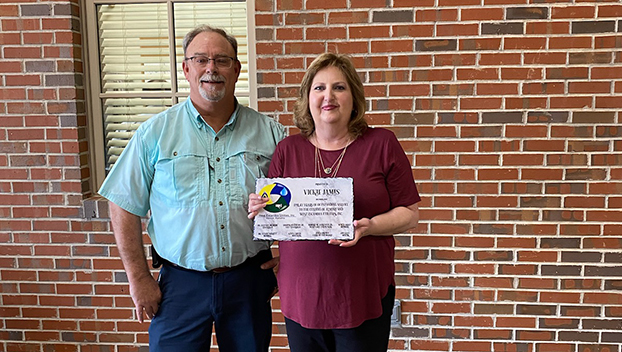 West Escambia Utilities Manager Kenny Smith (left) is shown with Vickie James, who is retiring from the board today after 43 years. | Submitted photo

A familiar face is retiring from West Escambia Utilities.

After 43 years of service, Vickie James will punch her time card for the final time as the clerk of WEU board today, Dec. 30, 2021.

James then transitioned to her position as clerk of the board, and worked there until her retirement.

James said the most rewarding part of her job was working with people, her work family.

“I just like to work,” she said. “I like working with numbers. I’ve enjoyed the job. It’s been a good job. It’s what I like doing. I love being around people, the customers and my coworkers. That’s going to be the hardest thing to leave.”

“She will be missed even by our board members as they see her once a month,” Smith said. “Anybody we lose, most of the town knows them. It’s going to be a tough loss, but we knew it was coming.”

“With the different things like SRF loans and grants, her and (Atmore City Clerk) Becca (Smith) worked together,” he said. “There’s a lot of working together, even if we don’t work the same job. It’s changed a lot.”

“Her and her nature and personality, she’s a wonderful lady,” Smith said, adding that he’s gotten the chance to know her outside of work as well. Both of their daughters, Katie Smith Brantley and Railyn Rolin, know each other well.

James said she’s made a lot of special memories while at WEU. Since working at WEU, she met her husband, Tony, and had a child, Railyn.

“I’ve had lots of special memories here,” she said. “Everything’s been good.”

In retirement, James said she’s going to be taking care of her husband, who has stage five kidney disease.

Additionally, Jame said she’s going to spend some time with her grandchildren.