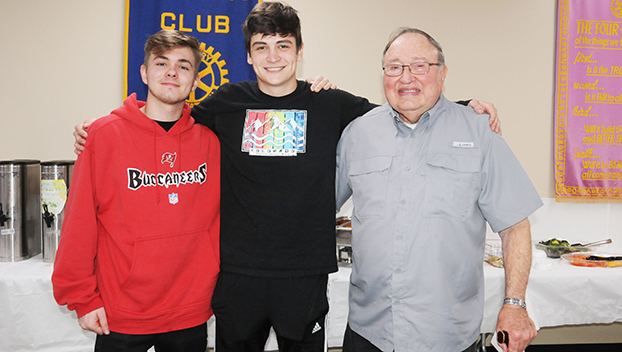 Bennett Clark and Hannes Ebbinghaus fed off of each other as they spoke to the Atmore Rotary Club on Dec. 28.

Clark – the eldest grandson of Rotary Club Member Dennis Bilbo – and Ebbinghaus got to know each other through the German American Partnership Program (GAPP).

GAPP’s mission is to promote the study of German abroad and encourage international cultural exchange, according to its website.

While in high school, Clark spent some three weeks in Germany, and lived with Ebbinghaus. He spent most of his time in the classroom studying the German language. Ebbinghaus is from west Germany.

Ebbinghaus did the same in America, studying at Clark’s high school.

Since then, Clark and Ebbinghaus have remained close, texting each other over the last four years.

When the COVID-19 pandemic lightened up after the Delta variant, Ebbinghaus jumped at the idea of coming to the United States to see his friend.

“It’s been awesome to have him over here,” Clark said.

Club members asked Clark and Ebbinghaus about their time in Germany. Both recalled traveling to the North Sea, taking part in the food scene, visiting cathedrals and castles.

At present, Ebbinghaus is enrolled in one of the largest universities in Germany. He is studying the German language, and said he wants to become a teacher.

Clark aims to become a teacher as well.