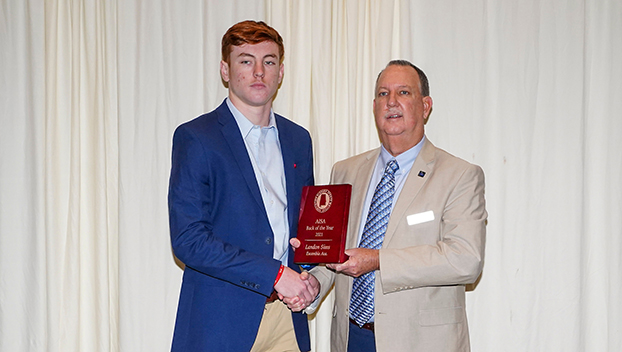 AISA Back of the Year Landon Sims of Escambia Academy receives his plaque from AISA director Michael Mclendon during the ASWA Mr. Football Banquet at the Renaissance Montgomery Hotel & Spa at the Convention Center in Montgomery, Ala., on Thursday, Jan. 13, 2022. (Marvin Gentry | preps@al.com)

MONTGOMERY — Escambia Academy’s Landon Sims was named the 2021 AISA Back of the Year by the Alabama Sports Writers Association on Thursday.

Sims was one of three finalists for the award, and was honored along with other backs and lineman of the year at the Mr. Football luncheon banquet at the Montgomery Renaissance. The Alabama High School Athletic Directors and Coaches Association sponsored the event.

“I couldn’t have accomplished this without God, my parents,” Sims said, adding that his teammates helped him as well. “With out them (teammates), and the offensive line blocking, and wide receivers catching and Bubba (Nettles) running the ball, I wouldn’t be up here.”

Throughout the season, Sims played a good game on the gridiron.

“I felt pretty good,” he said. “That was a point we all felt like we were pretty good.”

Sims said not only did his teammates help him succeed, but the Cougars’ coaching staff contributed in him winning the back of the year award.

“The coaches were great,” he said. “We just had a great program. Without any of the, you couldn’t be up here.”

Thompson’s Ryan Peppins was named the state’s Mr. Football by the ASWA.

Peppins, a senior receiver, helped his team win a third straight Class 7A championship this season. He totaled 80 receptions for 1,379 yards and 23 touchdowns for the Warriors, who finished 13-1.

Peppins was also the 7A back of the year, marking the fifth straight season that a Thompson player has won that award.

Peppins and teammates Jeremiah Alexander and Conner Harrell were on the Super All-State list, which recognizes the top 12 players regardless of classification.

Thompson is just the second team in ASWA All-State history to have three Super All-State players in the same season. In 2005, Homewood had David Ross, Austin Hubbard and Tim Hawthorne make it.

Backs of the year

Linemen of the year

(top players regardless of school’s classification)