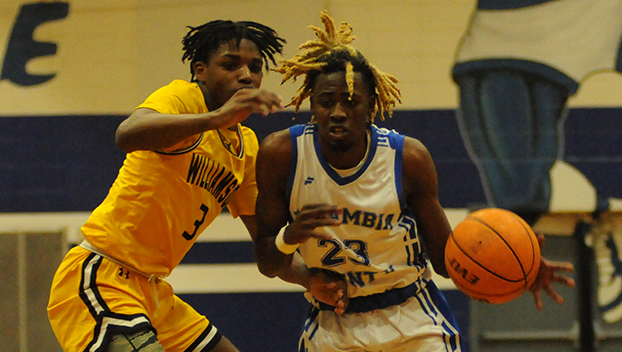 Escambia County’s defense was the difference tonight as the Blue Devils defeated Williamson 59-39 in area action at Cornell Torrence Gymnasium in Atmore.

The Blue Devils and Warriors played close throughout the first half. ECHS held a 23-16 lead going into halftime.

No. 2 ECHS began to pull away in the third period, outscoring No. 5 WHS 10-8. Sheldon Williams, who led the Blue Devils with 22 points, hit a buzzer beater 3-pointer to put the game away going into the fourth period.

Williamson didn’t go away in the fourth, but kept Atmore honest.

“We started off sluggish, but we got the win,” ECHS boys basketball coach Layton Knight said.
Knight said the key to the defense was packing the lane, which limited Williamson’s shots.

Early on Williams got in foul trouble, but the rest of the team banded around each other.

Knight said the team played better because they knew they had to depend on each other.

With the victory, the Blue Devils improve to 18-3 overall, and 4-0 in Class 4A, Area 1. To host the area tournament, ECHS will need to beat WHS next Friday in Mobile. Before the Blue Devils make the trip to the bay, they’ll face St. Michael at home on Tuesday.

Stephen Williams added 14 points; and Hakeem Johnson notched 10 in the win for the Blue Devils.

In the third period, Johnson drove the lane to push the Blue Devils ahead 27-19. He later found another opportunity for a 29-20 advantage, and then answered on an assist to Stephen to put ECHS ahead by 11.

Williams hit a layup, and then got the 3-pointer at the buzzer to give the Blue Devils a 36-24 lead.

Stephen hit some easy buckets in the paint in the fourth period, and ECHS held against a fast Williamson attack.

Jayla Adams led with 19 points, and C’anna Betts had 18 points.

Betts was recognized earlier this evening as she reached the 1,000-points milestone.