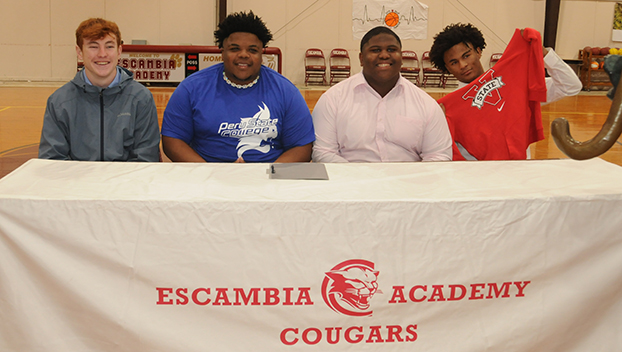 Four Escambia Academy football players signed to play at the next level today during the 2022 National Signing Day at the private school in Canoe.

“It’s my honor to be up here today to sign these guys,” Fountain said.

Fountain said the players’ signing is an accomplishment as not many get to do so. He said because of COVID-19, many scholarship spots aren’t open and a lot take advantage of the extra year of eligibility, along with the early signing day period in December.

Fountain said some 20 players have signed to play at the next level at EA over the last 10 years.

“It’s an opportunity, and it’s never the end of the line,” he said. “We are very proud of you.”
Sims thanked God, his family and teammates for helping get him to where he is today.

“I thank everyone for their support over the last four years,” he said.

Nettles said without God, he wouldn’t be where he is.

“I just want to thank my parents for believing in me, and keeping me on the straight path,” Nettles said.

Knight thanked God for putting him in the position he is in today, and his family and friends for pushing him hard.

Knight noted that his father pushed him his whole life to succeed.

Long thanked God, his coaches, teammates and family for their support.