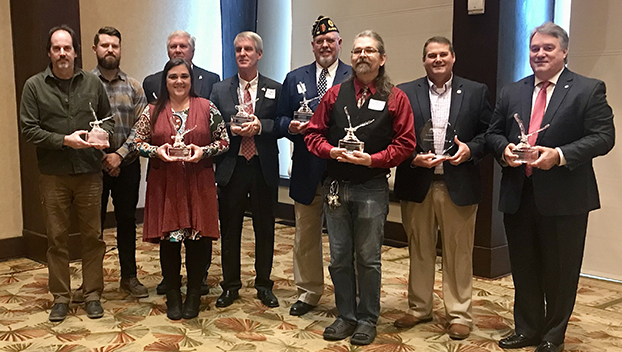 The Billy Glenn Rushing American Legion Post 90 is one of nine winners of the sixth annual Eagle Awards, which were honored today during a luncheon at Laker Guntersville State Park, according to a release.

The Eagle Award – sponsored by the State Parks Division of the Alabama Department of Conservation and Natural Resources – is presented annually to people and organizations who have made outstanding contributions in support of Alabama State Parks. For 2021, nine winners were selected from nominations submitted.

Led by Dave Graham, commander of the American Legion Post in Atmore, the group worked to create and place a steel vault called Old Glory Lookout, just off the Bald Rock Boardwalk, at Cheaha State Park. The vault was dedicated Dec. 7, 2021, the 80th anniversary of Pearl Harbor, during a public ceremony at the Old Glory Lookout. The first ashes interred were those from a flag retirement ceremony at Post 90 on the 20th anniversary of 9/11. The group had a dream to create a place that remains undisturbed and serves as a location for military, veteran and civic organizations in Alabama to inter the ashes of retired flags with dignity and honor and they made it happen.

This year’s winners and their hometowns included:

1) Bryan Eslava and Michael Sumlin with Down Under Dive Shop, of Gulf Shores (Community Partner)

6) Mirandi Watson and Monica Fells, both of Collinsville, with Girls Who Hike Alabama (Park Partner)

“The Eagle Awards symbolize the dedication and commitment it takes to make our parks second-to-none,” said Chris Blankenship, Commissioner of the Alabama Department of Conservation and Natural Resources. “It’s so rewarding to recognize and celebrate the incredible work done by all of this year’s winners. We thank them for what they’ve done for outdoor recreation and our Alabama State Parks.”