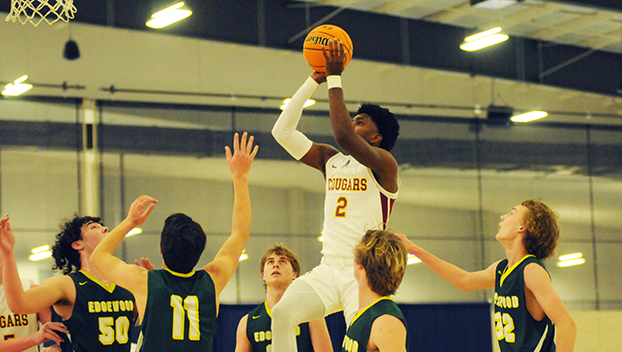 MONTGOMERY – Escambia Academy battled from behind, played a close game in the second half as the No. 5 Cougars beat Edgewood 56-51 today in an AISA Class 2A Elite 8 contest at the Cramton Bowl Multiplex.

With the victory, the Cougars (14-5) advance to face Chambers Academy in the Final Four. Tip off is slated for 7:30 p.m. on Friday at the multiplex.

EA boys basketball coach Willie White said the team was blessed to get the win.

“I thought I had them ready to play, but I didn’t,” White said. “It was just a blessing, and we were very fortunate we’re still in it. By all intents and purposes, we should’ve lost this game.”

Early and throughout the contest, the Wildcats found themselves shooting lanes and opportunities on the court. Edgewood pounded the baseline, getting buckets at will.

To start the run, Charlie Sasser nailed a 3-pointer, and Brian Brown folled that up with a rebound and putback. Brown added a layup to make it 16-15, and Bubba Nettles found Landon Sims for a 3-point play try with 1.7 seconds left in the opening half.

Sasser opened up the second with a pair of free throws to end the 11-0 run.

Edgewood’s Austin Champion pounded the paint for an old-fashioned 3-point play, and answered his own call with a 3-pointer to give the Wildcats a 22-19 advantage.

Sims answered with a rebound and putback to cut the lead to one, and Edgewood’s Gabe Lemaster got a 3-pointer to keep the lead.

A short moment later, Sims drove the baseline for a layup, and then found Sasser for a bucket to tie the game at 25-all.

Maliki Haynes hit a jumper, and Lemaster answered to bring it to 27-all at halftime.

Nettles started the third period on a coast-to-coast layup, and Champion added another 3-point play to his resume for the game.

Sims later picked up his fourth foul of the game with 5:42 left in the third.

The Wildcats took a 5-point lead on a 3-pointer from Bradley Boone.

EA bounced back thanks to a free shot from Brown, and a turnaround jumper and one from Haynes.

Champion then found Cooper Hall down low for pair.

Nettles hit a drive to the paint, and Brown added a rebound and putback to give the Cougars a 37-35 lead. The Wildcats added a free throw a short time later.

After a timeout, Nettles hit a layup, and Edgewood’s Brock Whitt got a 3-opinter with 1:28 left in the third to tie it at 39-all going into the fourth.

Sims converted a layup on a pass from Nettles, and Brown hit a rebound and putback for a 43-42 lead midway through the fourth.

Sims then fouled out with 4:33 left, and Champion gave the Wildcats a 2-point advantage at 45-43.

Later in the period, Nettles found Haynes for a bucket, and went coast to coast for a 47-45 lead with 2:29 left.

Edgewood’s Thomas Justiss tied the game at 47-all on a baseline drive, and Brown converted a pass from Nettles for a 2-point lead with more than a minute left.

Nettles and Sasser hit 1-and-1s late and the Cougars held.

“My hats off to them (Edgewood),” White said. “They played well.”

Brown led EA with 13 points; Sims and Haynes had 12 points each; Nettles scored 10; and Sasser had nine.

Champion led the Wildcats with 20 points.