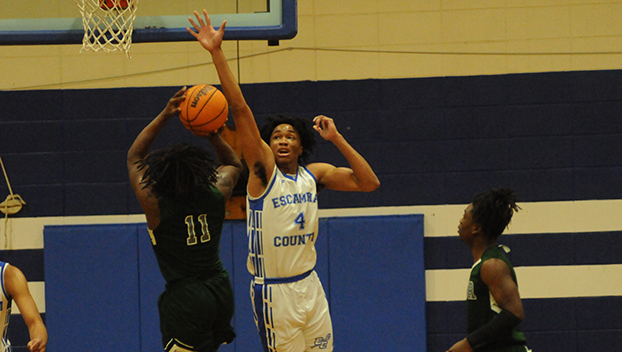 Escambia County put together a good run in the first half, and held on late to beat Vigor 46-40 Thursday night in the Class 4A, Area 1 tournament semifinals.

The No. 4 Blue Devils began the second period on a 9-0 run, and led 24-15 at the break. ECHS held a single-digit lead going into the fourth, where the Wolves’ perimeter game woke up to keep the game close.

“They hit some big shots,” ECHS boys basketball coach Layton Knight said. “We turned the ball over a bit. We’ve just got to be better with the physicality. That’s all it was.”

With the victory, the Blue Devils (24-4) advance to the area championship, where they’ll face Williamson tomorrow night at 6. WHS defeated St. Michael 57-41 in the other semifinal game.

Vigor kept the game close in the opening period, and led 8-7 going into the second.

Conor McPherson got the Blue Devils going on a nice pass to Sheldon for an easy bucket to get the run going. Hakeem Johnson answered a short time later with a 3-pointer to give ECHS a 12-8 lead.

The Blue Devils found Stephen inside, and he converted the turnaround jumper to make it 14-8. After a defensive stop, Johnson got the ball to Sheldon for a dunk to end the 9-0 run.

Vigor’s Kristopher Agee and Jermaine Coleman cut the lead to nine with a free throw and a 3-pointer early in the third.

Dirden answered on a nice pass to Sheldon to make it 30-19.

Vigor’s Brandon Whitsett hit a jumper and a layup to make it a 10-point game, and the Wolves added a shot to cut the Blue Devils’ lead to 35-27 going into the fourth period.

Larry Ruffin got a layup off a pass early in the fourth, and Whitsett helped cut the game to three points with a banked 3-pointer. He added two other 3-pointers in the same period to keep the game honest.

Earlier in the fourth, Dirden hit an old-fashioned 3-point shot going coast to coast, and later helped save an errant pass that was converted into a layup.

After a hard foul late in the fourth, Sheldon made a pair of free throws to make it 45-50 with 36.8 seconds left.

McPherson added a free shot, and Vigor had chances on the offensive end.