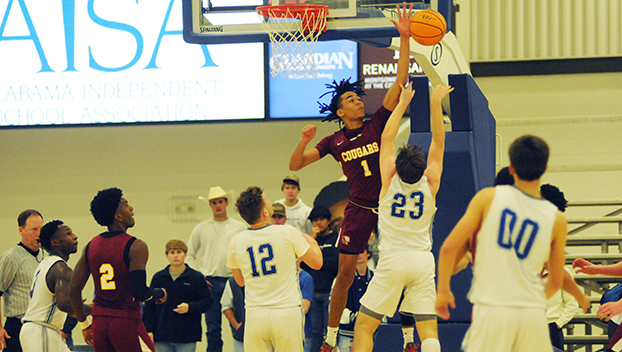 MONTGOMERY – Escambia Academy battled to the end Friday night, falling 34-33 to Chambers Academy in an AISA Class 2A Final 4 contest at the Cramton Bowl Multiplex.

A close game throughout the nightcap, the semifinal match up had a few lead changes. Neither team led by more than single digits during the 32-minute game.

However, a lot happened in the final 54.4 seconds.

Escambia Academy starters Landon Sims and Bubba Nettles fouled out and the Cougars kept it close, but the Rebels made some final free throws and held out in the end.

“That’s a testament to the guys,” White said. “We were just trying to hold it together.

“They played us hard,” he said about CA. “We just didn’t capitalize on our opportunities. The game just came out that way.”

With 54.4 seconds left, EA’s Charlie Sasser was fouled after Brian Brown got a steal. Sasser made the one and one to give the Cougars a 33-32 lead.

After an EA timeout, Maliki Haynes got a block on the defensive end with around 34 seconds, and the Cougars called another timeout to regroup.

Off of the inbounds, EA managed to commit a turnover, and the Rebels called a quick timeout with 27.9 seconds to go.

Chambers guard Cayden Hayley then made the one and one with 18.2 seconds to make the eventual game winning buckets.

EA had a chance with 2.1 seconds left after Haynes made a diving play on the ball, and was injured as a result.

White said during the final minute, they were trying to get a stop.

“We were going to try and ice it, and go the stall game,” he said. “We wound up throwing it away (turnovers).”

The Cougars led 26-24 going into the fourth period.

Hayley got a turnaround jumper to tie the game. Less than a minute later and after Sims fouled out, Chamber’s Jordan Whaley nailed 3-pointer to go up by three with some 4 minutes left.

Sasser then added a 3-pointer for the tie, and Chris Long got a steal with 3:36 left.

Out of a timeout, Hayley got a jumper to go, and Sasser tied the game again with a pair of free shots.

CA went ahead 7-0 in the first period, but the Cougars fought back to go up 9-7 going into the second.

Whaley led CA with 15 points, and Hayley added 10 in the win.

On the season, White said he was proud of the team for how they competed.

“It was quite an accomplishment for us,” he said. “No one gave us a chance. We had even less talent than last year.

“I was proud some of the football players that came out and helped us that never played a basketball game in their life,” he said.

Chambers advances to face Autauga Academy on Monday in the state championship game.