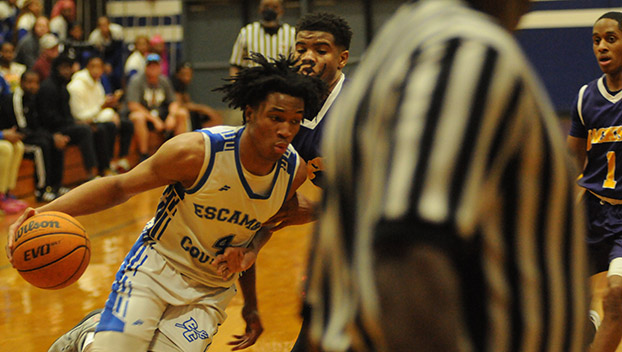 Escambia County's Sheldon Williams drives to the basket. An official is seen in the foreground. | Andrew Garner/Atmore Advance

Escambia County outscored Jackson 35-16 in the second half as the Blue Devils beat the Aggies 48-32 in a Class 4A sub regional tonight at Cornell Torrence Gymnasium in Atmore.

Jackson, patient with the ball and waiting for its shot in the first half, led 16-13 at the break. ECHS took its first lead of the game early in the third period and held on late.

With the victory, the No. 4 Blue Devils improve to 26-4 overall, and advance to the southwest regional semifinals next week at Garrett Coliseum in Montgomery. ECHS plays Holt at 10:30 a.m. on Mon., Feb. 21.

“It was a hard fought game,” ECHS boys basketball coach Layton Knight said. “He (Jackson boys coach Anthony Hayes) had a good game plan. He tried to stall the game. We weathered the storm.”

Knight said in the second half, the coaches encouraged the players to play smart, play solid defense and make good shots. And feed the post and inside.

In the third period, the Blue Devils tied the game from the jump, and then Sheldon Williams got a steal on the other end. Stephen Williams added a pair of free throws for his team’s first lead of the game.

Some 3 minutes later, Jackson tied the game at 18-18 on a coast to coast drive from Micah Caster.

Escambia County answered a short time later when Stephen put his head down and drove the baseline for an and-one play with 2:33 left. He made the free shot to go up 21-18.

Jacob Dirden added a one-and-one with 45.7 seconds left and the Blue Devils led 23-18 going into the fourth.

Stephen added a layup and a foul shot for a 26-19 advantage, and Jackson’s Walter Taylor got in a free shot to make it a six-point game.

Sheldon got a jumper, and a block in one sequence and Stephen added a layup to go up 30-22.

Escambia County took its biggest lead of the game on a layup form Conor McPherson with 3:18 to go.

Taylor added a layup with 2 minutes to spare to make it a seven-point game.

Dirden went on to drain seven free throws in the last 2:06, and Hakeem Johnson added a pair as the final seconds ticked down.

Johnson and Dirden led ECHS with 11 points each; Sheldon had 10 points; and Stephen scored nine.
Taylor led JHS with 12 points.

After the final buzzer, two events happened back to back – a proposal and ECHS players and coaches cutting down a net.

Knight silenced the crowd and passed the microphone to Joe Craft, who proposed to Shemarra Ephraim.

Ephraim said yes, and a short time later, the net came down.