Jean Jones Webb, of Wetumpka, formerly of Atmore, died in the early morning hours of Feb. 18, 2022. 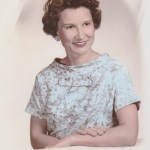 Born on Jan. 28, 1924, in Uriah, to Walter J. Jones and Ethel Mae Jones Taylor, Jean often remarked that she entered this world on a morning so bitterly cold, that her father had difficulty cranking the Model T Ford to fetch the doctor.

Jean was preceded in death by Doug, her husband, of 57 years.

In 1939, Jean and her family moved from Monroe County to Atmore, where her father, Walter, served as an agent on the Frisco Railroad. She graduated from Escambia County High School in 1941. In 1942, Jean married Douglas Schelling Webb of Atmore, who was serving as a captain in the Army Air Corp during World War II. After the war, Jean and Doug attended the University of Alabama, where they became lifelong Bama fans, and Jean obtained a teaching degree, while Doug earned a law degree.

They returned to Atmore in 1951, where Mr. Webb practiced law and eventually served as presiding circuit judge of Escambia County for 22 years.

Jean applied equal enthusiasm and dedication to teaching, both in Brewton and Flomaton before she joined the faculty at Ernest Ward High School in Walnut Hill, Fla. She taught high school English for more than three decades at Ernest Ward, where she finished her 40-year teaching career as an assistant principal. During her tenure there, Jean also studied and obtained a master’s degree from the University of West Florida. She graduated Phi Kappa Phi.

Jean is remembered with deep devotion by virtually everyone who knew her; her children, grands and great-grands consider her a profound and lasting blessing. With faith, intelligence and grace, she positively impacted the lives she touched. Her love of teaching and literature inspired her in later life to become a writer. She wrote and published numerous books under the pen name J.J. Webb.

The family will celebrate a private memorial service on March 19, at the home of the Rev. Robert Jackson in Prattville. Sometime In the Spring, a more inclusive celebration of life will be held. Hopefully Atmore friends and former Ernest Ward students will be able to attend.