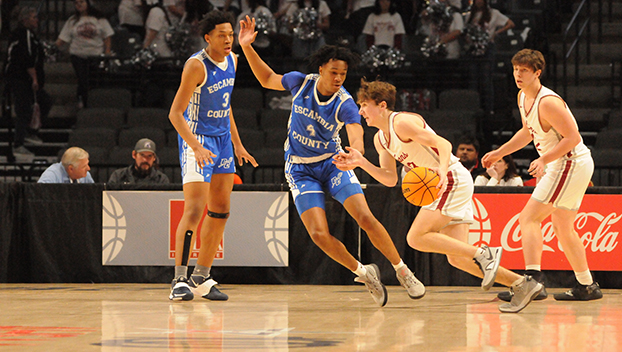 BIRMINGHAM – Escambia County outscored Haleyville 21-6 in the fourth period in a 70-60 come-from-behind victory during the AHSAA Class 4A state semifinals tonight at the BJCC’s Legacy Arena.

“I told my boys this game was history,” ECHS boys basketball coach Layton Knight said. “This is the first time in Escambia County history we’re playing in the state championship game.

“I told them, ‘y’all owe me a half,’ and they stepped up big and did what they had to do to bring it home,” he said.

With the victory, the Blue Devils advance to their first-ever state championship game. ECHS faces Jacksonville at 5:45 p.m. this Fri., March 4.

Both teams played with contrasting styles. HHS played a more outside game, while ECHS utilized its MO on the inside.

The Lions came out shooting, and found buckets at will throughout the first three periods of play. ECHS trailed 22-21 after the first period, 43-36 at halftime and 54-49 going into the fourth period.

Escambia County senior Sheldon Williams hit two free throws to begin the fourth period, and senior Jacob Dirden followed with a jumper to cut it to one.

Halevyille’s Drake James answered with a jumper of his own to give the Lions the lead again.

Some 24 seconds later, Williams hit another jumper, and Drake followed.

From there and with 4:49 left, the Blue Devils played solid defense, grabbing rebounds and converting on the offensive end.

Connor McPherson hit a layup, and Dirden followed with a bucket of his own. Dirden added a 3-pointer to give ECHS a 62-58 advantage with 3:31 to go.

Stephen Williams then hit a jumper in the paint, and HHS then cut the game to four on a Drake jumper with 2:35 to go.

McPherson made a layup with 2:16 left; Dirden and Hakeem Johnson made free throws down the stretch.

Both Williams and Johnson said it feels good to have the chance to play in the state championship game.

“This is what we all dreamed of doing,” Johnson said.

“It’s a true blessing,” Sheldon said. “It’s our first time here. I feel like we deserve it.”

Knight said during the fourth quarter with the way the Lions shoot the ball, he knew there could be a cool down period.

“We wanted to be sure they had a cool down period, and then we heat up,” Knight said. “When they came down and made those shots, we capitalized down on the inside.”

Earlier in the second half, Johnson got a 3-pointer to start the third, and Stephen hit a jumper in the paint a short time later. McPherson added a jumper, and Stephen made a field goal late.

Haleyville’s Joe Aldridge scored all 10 of the Lions’ points in the third period.

Haleyville coach Dylan Burleson said two teams with different styles played tonight, and something was going to give.

“There are obviously things we could’ve done better,” Burleson said. “I can’t tell you how proud I am of our guys. They have done something no other Haleyville team has done.”
On the fourth period of play, Burleson said the boys played well, had good tempo and pace, but they ran out of gas.