Blue Devils, Jacksonville to tip off in 4A state championship Friday 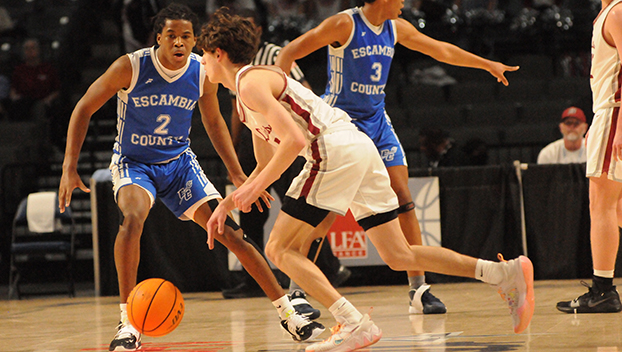 Escambia County will be in new territory Friday as the Blue Devils face Jacksonville in the AHSAA Class 4A boys basketball championship game in the Legacy Arena at Birmingham’s BJCC.

The Blue Devils defeated Haleyville 70-60 in a thrilling come-from-behind victory on March 1, marking the team’s first trip to the state title game in program history.

“That was big,” ECHS boys coach Layton Knight said. “We made history.”

In the victory on March 1, the Blue Devils trailed after the first three periods, but bounced back in the fourth, rallying to outscore the Lions 21-6.

Like HHS, Jacksonville is a team that plays with a different style, Knight said.

Knight said JHS has big guards, and a bigger backcourt while ECHS has a bigger frontcourt.

“I think, just based on our personnel – if I had their personnel – I’ll have to play inside out,” he said. “If you’ve got a couple 6-foot-7 and a 6-foot-8 players on your team, you’d be crazy to shoot a lot of threes.”

Knight said a few keys for ECHS in Friday’s game is playing defense with intensity, taking care of the ball and executing on offense.

While both teams will be putting on different styles on the court, both have battled through adversity this season.

In mid January, Escambia County, trailing 19-10 at halftime to area opponent St. Michael, went on to outscore the Fairhope school 32-2 in the second half.

Knight said that win was big for the program.

And throughout the adversity the Blue Devils have faced during the playoffs, Knight said the team knows that former boys basketball coach John Shears is with them. Shears passed away in April 2021.

Knight said the southwest regional semifinal win over Holt was special to him. Knight coached his last game with Shears during the team’s loss against Holt during the 2021 postseason.

“When the playoffs hit, we dedicated everything for Shears,” Knight said. “His last game, was against Holt (in 2021), and I knew it would be OK and everything is falling into place as it should be. That was the last time I coached with him.

“Shears and I became like brothers,” he said. “I liked coaching up under him. Everything is planning out in our favor.”

The basketball team will be departing Atmore at 11:30 a.m. tomorrow, Thurs., March 3.