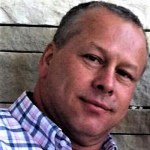 He is preceded in death by his mother, Joyce Stabler Stinson; special parent, Louise Warren; and his brother, Roderick Stinson.