An Atmore man was arrested on multiple drug charges April 19, according to the Atmore Police Department.

Public Information Officer Sgt. Darrell McMann said in a release that Keith Lamor Williams, 48, of Atmore, was arrested and charged with drug trafficking, possession of marijuana I and possession of drug paraphernalia. 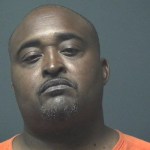 McMann said at approximately 10:40 p.m. on April 19, investigators assigned to the Drug Task Force executed a search warrant at a residence on East Fourth Street.

McMann said the investigation is continuing as other items were found in the residence that could result in additional charges.