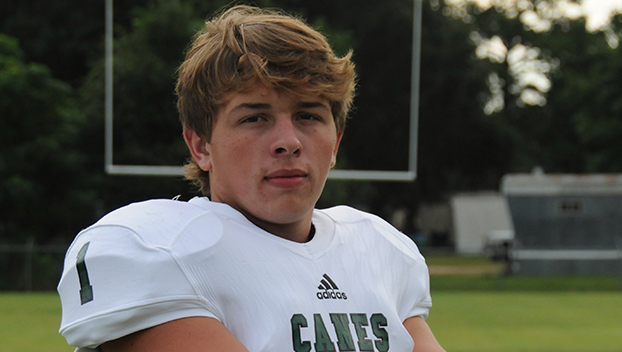 As a boy, Flomaton senior quarterback Zeb Vickery dreamed of playing football at the University of Alabama.

Vickery’s dream will come true this fall as a preferred walk on after deciding to play for the Crimson Tide over the University of Alabama-Birmingham. He announced his decision on Tuesday via his Twitter account.

Vickery said early in his recruitment, UAB jumped at the opportunity, but UA would let him know something after the spring. He said one of the Alabama coaches called Monday wanting his cell phone to give to UA offensive coordinator Bill O’Brien.

“Coach O’Brien called me around Monday night at 8,” Vickery said. “He talked to me and told me he wants me there, and he wanted me to be one of the five quarterbacks. He told me he had to talk to (UA head football) coach Nick Saban Tuesday, and then he’d let me know after that.”

Vickery said he was sitting in history class on Tuesday when O’Brien called with the preferred walk-on offer.

“He called me, and that’s when he offered it to me,” he said.

Vickery said the moment when O’Brien called and made the offer was surreal.

“I still can’t wrap my mind around it,” he said. “I have been an Alabama fan my whole life. It’s been a childhood dream to play. It was crazy.”

He said the opportunity to be around elite players and coaches was one he couldn’t pass up.

“Being in the same room with the Heisman Trophy Winner, I don’t know many who can say that,” Vickery said. “And obviously playing for coach Saban. Being able to call that dude my coach is going to be insane.”

Vickery played quarterback, punter and holder at FHS, a Class 3A school. During his sophomore, he suffered a torn ACL and helped lead the Hurricanes to playoff appearances in his junior and senior seasons. The Hurricanes won the state title in 2018, when he was a freshman.

FHS head football coach Doug Vickery, Zeb’s father, said on his Facebook page that this opportunity has been a dream of his son’s since he could throw a football.

“The journey has been a tough one,” Doug said. “Zeb had to battle back from his ACL surgery his sophomore year. This took eight long months of physical therapy to rehab his knee.

“As his coach, I am extremely proud of him,” he said. “It’s always gratifying to have players move on to the next level. But, as his dad, there are hardly words to describe the emotions. I am truly blessed to be his dad. God has big plans for Zeb. He is opening doors that only He could open.”

During his senior season, Vickery threw for 1,018 yards and 11 touchdowns. He rushed for 197 yards on 22 attempts and 1 touchdown.

Vickery will report to UA for summer workouts and practice on May 29.

In the future, Vickery wants to follow in his father’s foot steps and become a coach.

“That’s what I talked to coach O’Brien about,” he said. “He was just telling me it was just such a great opportunity. The opportunity at UAB was great, but Alabama is a whole ‘nother level.”

Vickery is the son of Doug and Leah Vickery.