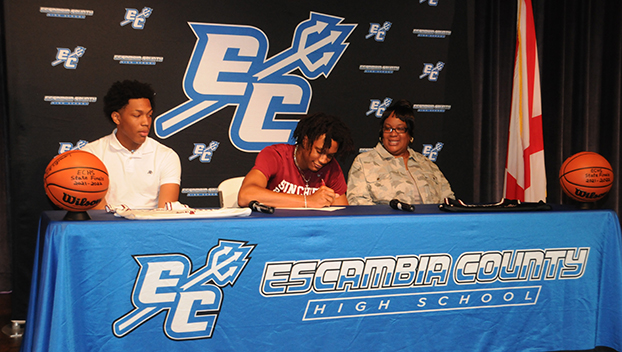 Williams made the decision official on April 25 in front of the senior class, his fellow teammates and the student body who supported the Blue Devils during the state finals run.

“This is a bitter sweet moment,” ECHS boys basketball coach Layton Knight said. “I’ve had (coached) him since he was in middle school. They’re getting a great player.”

Indeed the Sun Chiefs are.

Williams averaged a double double 22.3 points and 12.2 rebounds per game this season with 96 blocks. He was selected as a finalist for Alabama Sports Writers Association Class 4A player of the year.

Williams will be playing with someone familiar in his older brother, Lue, at CACC.

He said he was already familiar with the Sun Chiefs’ program through his brother.

Williams said he chose CACC because he thought it would be a good starting point.

“It’s (junior college),” he said. “I wanted to go (Division 1), but with the change in coaching staff at (Alabama State University), I decided to go JUCO to get better options and more exposure.”