An Atmore man was arrested and charged with multiple counts of attempted murder and several other charges today, according to the Amore Police Department. 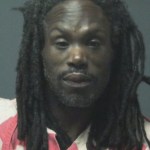 Sgt. Darrell McMann said in a release that Kelvin B. Cooper, 45, of Atmore, has been charged with nine counts of attempted murder, nine counts of reckless endangerment, 10 counts of terroristic threats, one count of certain persons forbidden to possess a gun and one count of possession of a controlled substance (crack cocaine).

McMann said at approximately 8:42 a.m. May 28, officers with the APD responded to an address on Ann Street in reference to shots fired.

“When officers arrived on the scene, they discovered three people had been hit with pellets from a shotgun,” McMann said. “The suspect, Kelvin Bernard Cooper, age 45, of Atmore, had been in a dispute with another male at the location and left.”

McMann said then Cooper returned a few minutes later in his vehicle and allegedly told everyone there he was going to come back and kill everyone.

“Cooper returned a few minutes later and yelled, ‘All of you are about to die,’ and shot several times from his open window in his vehicle,” McMann said. “Cooper fled the scene but was spotted by a patrol officer on Union Street who was able to take Cooper into custody. Cooper also threatened to kill the officer.”