Our sweet Mother and Granny, Jennifer Lynn Green Farrar, 78, passed away on May 19, 2022 at Rush Hospital in Meridian, Miss., after a brief illness. 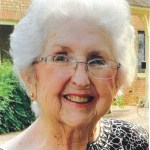 “Jenny” was born on Feb. 3, 1944, in Dothan. After graduating from Dothan High School, she attended Auburn University where she received her bachelor’s degree in education. At Auburn, she met her husband, Duke, in a social dance class. Duke took her flying for their first date, and he also played in a band, so Jenny was quite smitten with him. They had a great marriage. They settled in Goodway, where she taught for many years, mostly at Monroe Academy. During this time, she managed to survive breast cancer at the age of 31, and she went on to obtain a master’s degree in early childhood education from Troy University.

Jenny and Duke were very active members of their church, at Frisco City United Methodist. Jenny sang in the choir, taught Sunday School and nurtured her children in the faith. She was a wonderful mother. After Duke’s passing, Jenny moved to Meridian, and opened a Painting with a Twist business. Her loves included gardening, going to the beach, traveling the world, Auburn football, arts and crafts, cooking and spending time with her grandchildren and family.

Jenny is preceded in death by her husband, William Duke Farrar; her parents, JD and Hilma Green; and her brother, James Eric Green.

The family is accepting flowers or donations may be made to Pilots for Christ, Post Office Box 707, Monroeville, AL 36461.