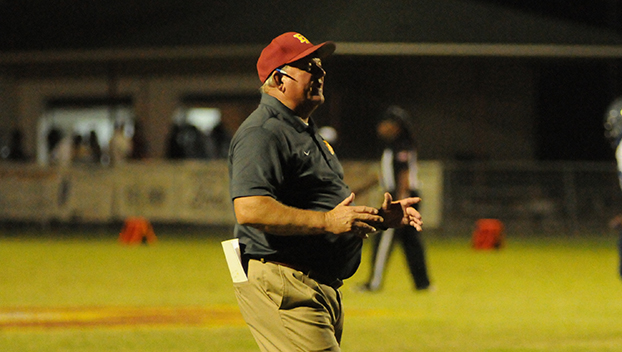 The Escambia County School System made it official Monday during a special-called board of education meeting.

Fountain, an East Brewton native, comes to WSN after spending 10 seasons as head football coach and athletic director at Escambia Academy. He previously served as head coach at WSN from 1989-1995.

While at EA, Fountain helped lead the Cougars to two AISA state championships, and compiled a 94-31 record.

Fountain said he’s excited about the opportunity to go back and coach at his alma mater.

“W.S. Neal has a special place in my heart because that’s where I’m from,” Fountain said. “It’s been a long time. My mother and father live within walking distance from the school. My brothers and sisters, there are five of us, we all love W.S. Neal and we all got high school degrees from there. We were pretty embedded in the community there.”

Fountain said the people at EA are similar to those at WSN, and the opportunity to work where he grew up was one he couldn’t pass up.

“Our family has a lot of tradition in that school,” he said. “I’m excited to be getting back in and working with people who are family, the people in the community.”

Fountain’s hire comes some two weeks after him stepping down from the same position, as well as headmaster, at EA.

He left the school to take the head coach and athletic director’s job at Pike Liberal Arts School in Troy.

Then, on June 6, PLAS Head of School Eric Burkett announced that Fountain chose not to fulfill his contract with the Troy school and is no longer the AD and head football coach.

Fountain said in all of this, he felt like God was giving him an opportunity to solely go back to coaching.

Fountain said when he had taken the job at PLAS, he then realized there were some other opportunities in this area that allowed him to be able to potentially stay at home, where his granddaughter, parents and family live.

“I called Pike on that Saturday (June 4) and told the principal that I hate to say this, and that I was sorry for not fulfilling my obligation to them, but I felt like it was best at this time to withdraw from the job, and try to get something here closer to home,” he said.

Fountain said he was then notified that the position was open at WSN.

“From there, that opened up the opportunity to go back to W.S. Neal,” he said.

Fountain, who became an ordained minister on May 1, said he believes the Lord has his hand in everything.
“I believe I’m trying to do what he wanted me to do,” Fountain said. “My passion has been coaching high school football. I felt like this was an opportunity to continue on that area and also to continue to grow in my ministry and to not have to be a principal.”

Fountain added that EA was always good to him, and he has no qualms against the Canoe School.