Nancy Grissett Davis, 77, of Barnett Crossroads, passed away on June 28, 2022 at her residence. 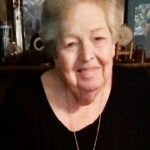 She is preceded in death by her husband of 56 years, MacArthur Davis; her son, Darren O’Neal Davis; her parents, William “Bill” and Mary Grissett; and her brother and sister in love, William “Colvin” and Mary Joyner Grissett.