EA’s Lanham signs to play softball at University of Mobile 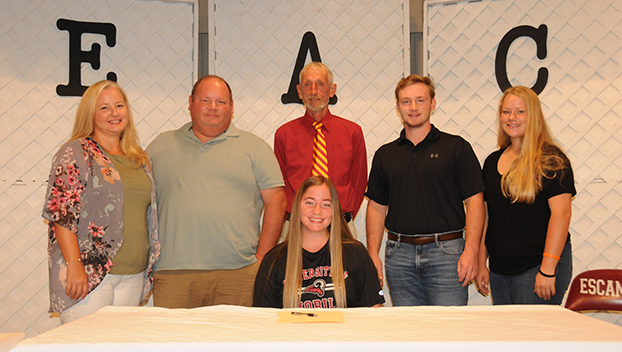 Shown in the back row from L to R: Stacey Lanham, Mitchell Lanham, Escambia Academy girls coach Larry Bonds, Brendon Lanham and Caitlin Lanham. Lillie Lanham is shown in the front row after signing to play softball at the University of Mobile. | Andrew Garner/Atmore Advance

Escambia Academy’s Lillie Lanham will fulfill a childhood dream this fall after signing to play softball at the University of Mobile on Friday.

Lanham, who graduated in May, made it official during a signing ceremony at the Canoe School’s auditorium with family, friends and former coaches present.

Lanham, the daughter of Mitchell and Stacey Lanham, was a three-sport athlete during her senior year at EA. She played volleyball, basketball and softball for the Lady Cougars.

“The work ethic of this young lady speaks for itself,” EA girls coach Larry Bonds said. “She rarely missed a practice. She played hurt and was always there for her teammates and school.

“Academically, she was always at the top of the class,” he said. “Athletically, she was captain of all three sports teams as she was the only senior.”

Bonds said during her time on the volleyball team, she holds the record with 92 straight serves without a miss; she led her team in points and assists in basketball; and was the most-feared hitter in softball. She led the team with a .688 batting average, got one base 75 percent of the time and played catcher and pitcher.

“It was an honor and privilege to have the opportunity to coach this young lady, even though it was for one year,” Bonds said. “This young lady has earned the love and respect for her family with all of them being here.”

Lanham thanked her family for all of its support, including the early days and late nights at the ballpark.

She thanked all of her coaches, past and present, and for them providing an opportunity for her to play the sport.

“I want to thank all of my teammates and friends for being by my side, and making this fun,” Lanham said. “I wouldn’t be standing up here without each and every one of you.”