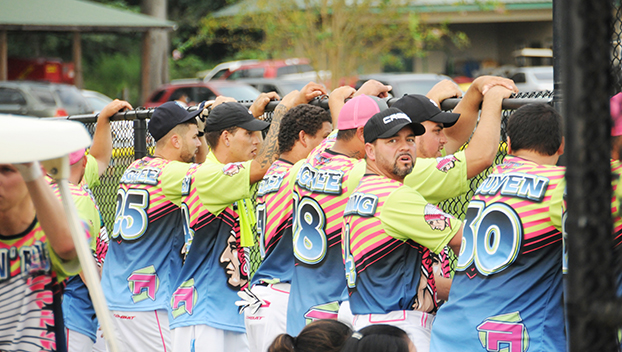 Shown is one of the softball teams from the 2017 tournament in Poarch. | File photo

The softball tournament will bring together teams from Tribes from around the country. This year’s teams are from the Poarch Creek Indians, Mississippi Band of Choctaw Indians, Eastern Band of Cherokee Indians and the Seminole Tribes of Florida.

“With 79 teams, that’s a lot of people,” McGhee said. “We’ll use all of our fields (at Arrowhead Park) and one field in Atmore (at Tom Byrne Park).

“We’re getting prepared and excited to get it kicked off and over with like we did the NAYO tournament,” he said.

McGhee said he’s looking forward to the camaraderie with the other Tribes.

“We know it’s going to be hot, but we prepared well for the heat,” he said. “We’re excited to host it.”

McGhee said PCI has 18 teams participating in the tournament.

“Our teams have been hitting, and working and are excited to play,” he said. “They play in our adult softball league every week. They’re really working hard, and hitting whenever they can. I’m happy for all of them, and excited for them to get out and play some ball.”

Admission to the tournament is free, and concessions will be available at the park.