Dr. Hugo Homer Rogers Jr., left on his trip to meet our Heavenly Father on Wed., July 20, 2022. He was born in Perdido in 1947, to Hugo Homer Rogers Sr., a lifetime railroader and Katherine
Brantley Rogers, a homemaker who raised five children. 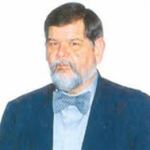 His vision for himself and others made his life full and an inspiration. Rogers attended Faulkner State Community College before departing for Auburn University in 1967. There he met his beloved wife, Crystal Harmon Rogers, co-founded the Auburn chapter of FarmHouse fraternity where he made lifelong friends. He served the Masonic Lodge of Auburn #76, faithfully attended Auburn United Methodist Church, raised two children and had a long career in science.

Though Dr. Rogers asked his children to understand him as “an old country scientist,” his
impressive career moved him between intellectual projects and positioned him on the front lines of basic research about climate change. Dr. Rogers enjoyed experimental design and had a particular affinity for building test chambers to run CO2 experiments on plants.
Rogers retired as a plant physiologist for global change at the National Soil Dynamics Laboratory after 35 years of service with USDA–ARS. He received a bachelor’s degree in botany in 1969 with honors, a master’s degree in plant physiology (1971) from Auburn University and a doctorate in environmental science and engineering from the University of North Carolina at Chapel Hill ( (1975), where he worked in the laboratory of Dr. Lyman Alonzo Ripperton.

Rogers’ first job was in the division of engineering, research triangle institute in North Carolina (1975) studying the control of airborne particulates by vegetation. In 1976, he began research as a plant physiologist in Dr. Walter Heck’s Air Quality/Vegetation Effects Program, USDA– ARS, Raleigh, N.C. From 1976 to 1984, Rogers served on the adjunct faculties of North Carolina
State University and the University of North Carolina at Chapel Hill.
In 1984, he moved to the USDA’s National Soil Dynamics Laboratory in Auburn. Rogers also held adjunct appointments in the Department of Biology at Duke University and the Department of Agronomy and Soils and the School of Forestry and Wildlife Sciences at Auburn University.
Rogers authored or co-authored nearly 200 publications, with his work appearing in prestigious journals including “Science and the Proceedings of the National Academy of Science (PNAS)”, generating thousands of citations. Rogers mentored numerous students and postdoctoral scientists, and often lectured to classes. He was a fellow of the American Association for the Advancement of Science (AAAS) and was ARS Scientist of the Year in 1993. In 2003, Rogers delivered the 20th annual Roscoe Ellis Jr. Soil Science lecture at Kansas State University. He took great joy and pride in his friendships in science and beyond and in keeping up with the
advancements in his science and that of his colleagues.
Hugo and Crystal shared a love of plants and the environment, having met in Dr. Freeman’s botany class at Auburn University. They journeyed throughout their marriage to the Spring Wildflower Pilgrimage in Tennessee. Hugo loved to travel and his work took him to fields and
conference rooms across America’s heartland, the Southwest, New England and California, as well as Scotland, Belgium, Germany, the Netherlands and Japan. Hugo pressed himself to the limit to see the world. On one memorable occasion, he found himself climbing out of a
volcanic crevasse as night fell on the Big Island of Hawaii. For Hugo, there was always a little more that could be squeezed out of time and opportunities. When he received the Scientist of the Year award for ARS, he and Crystal took in a Willie Nelson concert in Washington, D.C.
Hugo prized his friendships and enjoyed corresponding in letters, postcards and later emails. Friends will recall that he sent out an enormous number of personal and often highly detailed Christmas cards each year. Many are also grateful for the time and effort he took in brainstorming ideas, making phone calls, and helping write and rewrite resumes to secure jobs, funding and honors for friends and colleagues. Hugo was preceded in death by his parents; and sister, Rosemary Rogers; and leaves bereft his wife and two children, Dr. Hannah Star Rogers and Hiram Harmon Rogers. He also leaves in sorrow his three siblings. He is survived by his brothers Tolbert Rogers of Saraland and Norman Rogers of Atmore, along with his wife Sheila Rogers and their two children Spencer Rogers and Austin Rogers, as well as two great-nieces Harper Rogers and Anna Brantley Smith. He is also survived by his sister Barbara Rogers McCoy of Nokomis, and her son Ross McCoy and daughter Katherine “Khaki” McCoy, along with her three children, Tyler Bell and Lucas Bell, and Emily Bell. Hugo’s hallmarks were persistence and preparation, as he believed that fortune favored the prepared and in the limitless power of God to help us navigate the universe. We are unable to give summation to his life, well-lived.
We ask that in lieu of flowers donations be made to Alabama Prison Arts and Education Project (https://apaep.auburn.edu/) because of his interest and concern about the wellbeing of prisoners and his volunteer work in this area earlier in life.