An Atmore man has been arrested and charged with attempted murder after leading law enforcement officers on a high-speed pursuit into Baldwin County, according to the Atmore Police Department.

McMann said the arrest came after Ivy was taken into custody off of Highway 47, nearby where stop strips were deployed.

“The pursuit eventually came to a conclusion off of Highway 47 when Ivy turned around and began driving back in the direction he had just come from,” McMann said in a release. 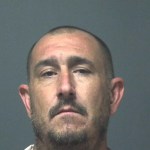 McMann said the incident began this morning when patrol officers with APD were given a description by narcotics investigators of a grey Dodge Journey displaying a dealer tag that had been observed several times in the area of Carver Avenue attempting to purchase narcotics.

McMann said as the first traffic stop was being held, a second patrol officer attempted to conduct a traffic stop on the Dodge Journey.

“The vehicle accelerated at a high rate of speed on Highway 31 when the driver, later identified as James Earl Ivy, age 41 of Atmore, began driving recklessly and ran a vehicle off the road near the country club,” he said. “The officer decided not to pursue due to Ivy’s reckless driving and disregard for the safety of other drivers.”

McMann said Ivy then turned south on Highway 31 with the investigators in pursuit, and continued into Baldwin County, where he turned onto Highway 47.

McMann said the Baldwin County Sheriff’s Office and the Alabama State Troopers joined the pursuit with BCSO taking over.

“During the pursuit, stop strips were deployed,” he said. “The pursuit eventually came to a conclusion off of Highway 47 when Ivy turned around and began driving back in the direction he had just come from.”

McMann said Ivy was taken into custody without further incident. Ivy also has a warrant for bail jumping from Tennessee, but the agency isn’t extraditing him back to Tennessee. He was transported to the Escambia County Detention Center. The front seat passenger isn’t facing criminal charges, and was transported to by ambulance to Atmore Community Hospital with no life-threatening injuries.