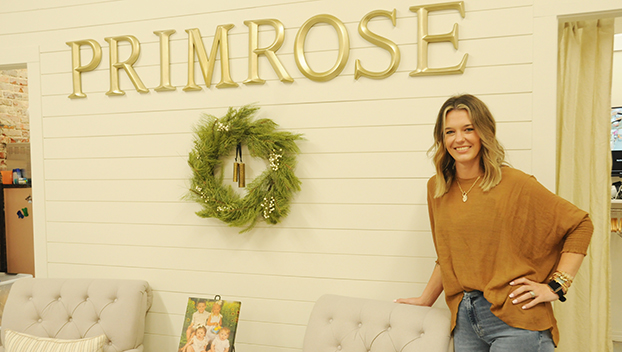 When Courtney Harris’s husband, Blake, asked her what she’d do if she wasn’t working as a nurse, she thought about it and her answer is Atmore’s newest business.

Primrose Childrens Boutique officially opened its doors Aug. 18 for a grand opening at its location on South Main Street in what was the old Western Auto Building.

Courtney, the owner, said she’s been a nurse for 10 years and they have four small children, Fettler, 6, Emiline, 4, and twins, Maggie-Blake and Beau, both 2 years old.

“I’ve been travel nursing for the last year,” Courtney said. “We went on vacation to Aruba in June, and he (Blake) said, ‘I’ve missed out on my kids for the last year. What would you do if you didn’t do nursing?’

“I sat there and though about it, and I said, ‘Just 4 Kids just retired, and Tiger Lily is gone,’” she said. “’I would love to open a childrens boutique store. Mainly because we have few options here, but for the most part, you have to drive to Fairhope, Mobile or Pensacola (Fla.).”

Courtney said she told her husband that if they don’t act soon, somebody else is going to establish a childrens boutique.

“When we got home from Aruba, we started looking for buildings,” she said. “We were able to get this building and remodel it, and it is everything I dreamed of.”

Courtney said remodeling began in late June, and included ripping out layers of vinyl flooring, and ripping out the pegboard and concrete plaster over the now exposed brick.

“We have to have multiple hammer drills to expose the brick,” she said, adding that they worked on exposing the tongue and groove ceiling.

Courtney said the boutique offers everything newborn, girls go up to size 8, and then boys’ T-shirts up to a size 16.

“We have so many brands coming in,” Courtney said. “We’ll have AFTCO for boys and men starting in about a month, and I”ll have shoes for men and boys that’ll match.”

The name of the boutique is one of significance for Courtney.

“I have four children, ages 6 and 4 and twins that are 2 years old,” she said. “I wanted to incorporate all of them, but that was hard to do. Primrose is the birth month flower of my twins. Since they’re my youngest babies, that’s what I decided to do go with.”