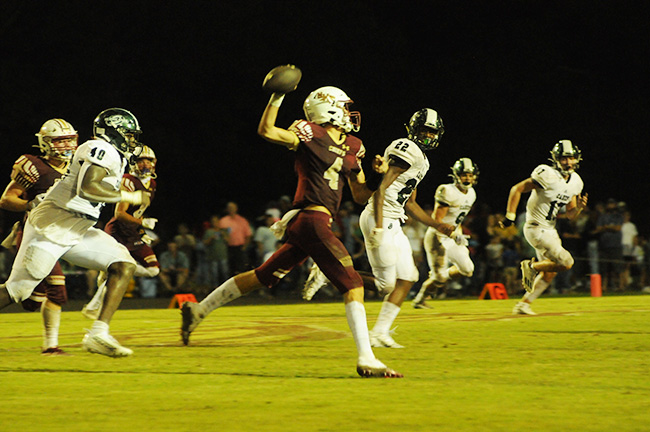 Escambia Academy fell 49-20 to Clarke Prep tonight on the road.

Cougars head football coach Brandon Wilcox said a lot of first-game mistakes were made, and the team must correct them.

“We’ve got to get better up front on offense and defense,” Wilcox said. “We have to be able to stop the run on defense, and we have to run the ball on offense.”

Wilcox said he was proud of quarterback Jacob Lee, who gutted it out four quarters.

“He played extremely hard,” he said.

Wilcox said young guys got some reps tonight, and stepped up, adding that they may be working to play more.

EA will play its home opener next Friday night against Banks Academy.

Northview’s Jamarkus Jefferson scored three touchdowns and Kaden Odom and Luke Bridges scored one each in the Chiefs’ win.

The Chiefs also had a safety on defense.

Summerford said he was proud of the team for getting off to a fast start.

Hurricanes head football coach Doug Vickery said the boys played hard, and he is proud of them.

“They played their guts out,” he said.