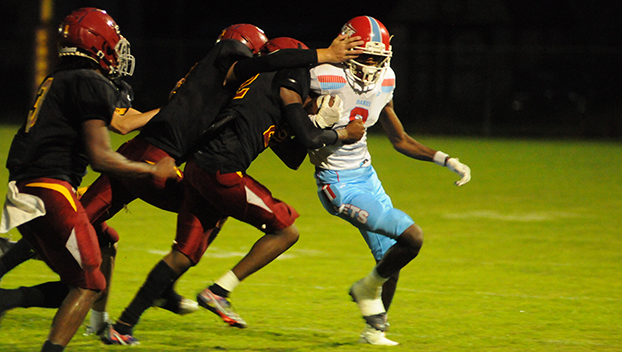 Escambia Academy showed signs of improvement from week one, but ended up falling short to Banks Academy 23-12 tonight at Bachelor Field in Canoe.

The Cougars (0-2) played close with the Jets from Birmingham for the entire first half, trailing 10-6 at the break. BA answered in the third with two touchdowns of its own to pull away.

“We missed some opportunities where we could’ve busted some big plays,” Wilcox said. “A lot of times we’re one block or we’re one thing if we execute, we bust it. We’ve got to make corrections.”

This is the first of four games in a row at home for the Cougars. EA hosts Jackson Academy next week.

In the first half, the Jets got on the board with a 21-yard field goal by Treamel Almacen. There wasn’t a running clock for the first 6 minutes, 37 seconds of the game.

Late in the first, the Cougars tried for a fake punt with 1:49 left, but failed in the effort and BA led 3-0 going into the second.

EA’s defense, which penetrated the front line well, got a sack with 9:45 left in the first half to get some momentum.

However, EA fumbled the ball on its next offensive possession.

The Jets then took advantage on their next possession on a 6-yard touchdown rush from Josh Bonner with 7:34 left.

The Cougars fumbled their next possession, but got the ball back on a recovery on defense by Ty McCants, a freshman.

Quarterback Jacob Lee found pay dirt on a 6-yard rush to bring it to within four with 4:27 left in the opening half.

The Jets got to the EA 9-yard line with 23.9 seconds left in the half, but Christian Crook grabbed an interception to hold BA at bay.

To open the third quarter, BA put together a scoring drive that gave the Jets a 10-point lead. Anthony Ruffin found Artrell Cox on a 12-yard touchdown run.

On EA’s next possession, Lee found Cameron Ball on a long pass to convert a third down, and scrambled to find Crook for a 10-yard scoring pass with 3:26 to play in the third quarter.

Late in the same quarter, BA found the end zone again on a Almacen 1-yard rush to put the Jets up 23-12 with the made PAT.

The Cougars didn’t give up in the fourth quarter as the defense stepped up on some plays.

Wilcox said overall he was proud of the effort.

Wilcox said the offensive and defensive lines, along with the linebackers improved from week one to week two.

“We’re going to keep working on it and keep getting better,” he said. “This was a short week of preparation (because of the inclement weather forecasted for Friday). I thought our guys handled it well. I give credit to coach (Jermaine) Watson and his team. They did well.”