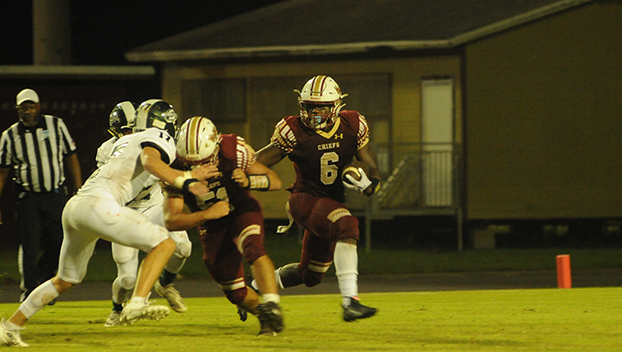 It’s going to be hard for Nothview head football coach Wes Summerford to chose this week’s Florida Farm Bureau Chief of the Week.

Chiefs running back Jamarkus Jefferson scored five touchdowns and quarterback/safety Kaden Odom played well on both sides of the ball to help lead NHS to a 34-25 victory over Tate, Fla. tonight in Cantonment.

Summerford, who was playing against his brother, Rhett, head coach at THS, said it was one of those games where a big play was going to happen sooner or later.

The turnovers included a fumble recovery by Caden Peterson and an interception catch by Wyatt Scruggs.

“Our guys fought,” Wes said. “I challenged them. They’re running more platoons than we had. I thought our guys did a good job of accepting the challenge. It was big for our program.”

With the victory, the Chiefs improve to 3-0 overall, and face Elberta next week for homecoming.