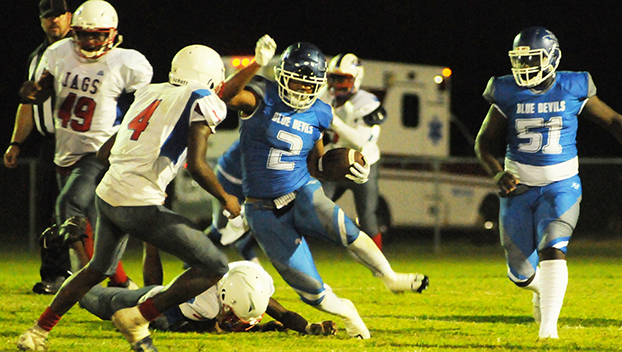 Whatley scored his first two touchdowns in the first half as ECHS built a 27-0 lead going into halftime. He scored his third early in the second half on a 1-yard scamper.

“The kids were physical, and they did what they were supposed to do,” Harris said. “I’m proud of them, and for getting the win. Our execution is getting a little bit better each week.”

The win tonight comes seven days after the Blue Devils traveled to Fairhope and fell 42-13 to St. Michael in Class 4A, Region 1 play.

“I was proud of the way they responded,” he said. “That’s something big for them to respond the way they did. We’re trying to turn that corner.

“We’re trying to understand how to handle adversity,” he said. “To play the next step and getting them through that adversity.”

With the victory, ECHS improves to 3-1 overall, and 2-1 in region play.

The second touchdown for ECHS came on a touchdown pass from Dakota DeSpain to Lorenzo Arnold in the first half.

With a big lead, there was a running clock in the second half.