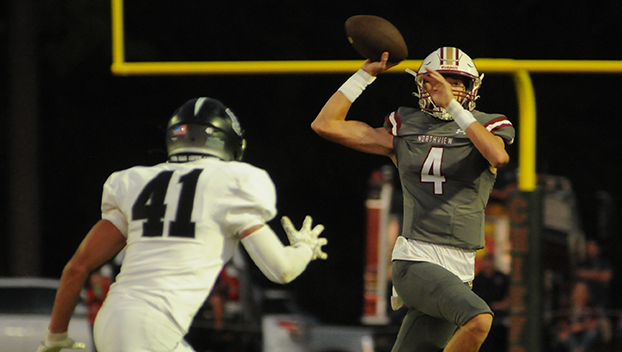 Northview’s Jamarkus Jefferson scored three touchdowns and Kaden Odom added a pair of passing scores to help lead the Chiefs to a 49-24 victory over Elberta (Ala.) tonight on homecoming at Tommy Weaver Stadium in Bratt, Fla.

Odom and Jefferson scored their first touchdowns on the night after NHS fell behind 7-0.

Elberta responded trailing 14-7 on a 44-yard field goal to cut it to four.

“Through the course of the season, you’re going to have those games,” Summerford said. “Our offense did a good job all night, and our defense kept up the usual trend of being lights out in the second half.”

Summerford said EHS played side to side early in the game, and once the Chiefs figured it out, it led the offense to start rolling like usual.

With the victory, the Chiefs improve to 4-0 on the season, and host Baker, Fla. next week.

Summerford said the players will be motivated for the game against BHS.

“They’ve been wanting to beat Baker for a while now,” he said. “I think they’ll be ready to get after it on Monday.”