A Pensacola, Fla. woman was arrested by the Atmore Police Department Sept. 18 on drug and theft charges, according to officials. 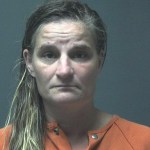 Public Information Officer Sgt. Darrell McMann said in a release that Shelly Bullard, 44, of Pensacola, was arrested and charged with two counts of possession of a controlled substance and theft of property IV.

McMann said APD officers responded to the Walmart at approximately 10:05 p.m. on Sept. 18 in reference to a shoplifting complaint.

“When officers arrived, they contacted the suspect (Bullard),” McMann said. “Bullard had placed several items in her purse which were visible as they were protruding from the top of her purse.”

McMann said when the officers removed the stolen items from Bullard’s purse, they also discovered several pills she didn’t have prescriptions for in two different unmarked plastic containers.

“She was in possession Alprazolam and Methadone Hydrochloride,” he said. “They are considered controlled substances by Alabama statute.”

Bullard was transported to the Escambia County Detention Center in Brewton.