An Atmore man was arrested and charged with elder abuse and domestic violence charges, according to the Atmore Police Department. 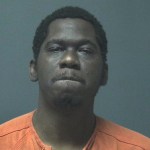 McMann said the arrest stemmed from an incident that occurred on Sept. 22 at approximately 10:30 p.m.

McMann said APD officers responded to a residence on East Fourth Street in reference to a domestic disturbance.

McMann said the suspect, Dixon, began arguing with his mother.

McMann said the victim received a severe laceration on his forehead, was treated and released after seeking treatment

McMann said Dixon was transported to the Escambia County Detention Center in Brewton.