An Atmore man has been charged on multiple theft and drug charges, according to the Atmore Police Department.

Public Information Officer Sgt. Darrell McMann said in a release that Dalton Harrison, 26, has been charged with theft of property I, criminal mischief I, criminal trespassing III, possession of a controlled substance and possession of drug paraphernalia. 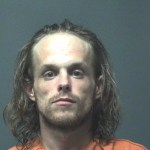 McMann said in a release that Harrison’s arrest stemmed from an alleged theft of property and criminal mischief call at Pepsi Bottling Co. and Lee’s Collision on two different dates.

“Twenty-six cooling units that were being stored outside were damaged when the aluminum evaporators were cut out of the cooling units,” McMann said.

McMann said on June 9, 2022, APD officers responded to Lee’s Collision in reference to several catalytic converters that were cut off of vehicles.

“Lee’s Collision was able to provide security video of the suspect while he was on the property,” McMann said. “The video was downloaded to the Atmore Police Department Facebook page in an effort to identify the suspect in the video. Dalton Harrison, age 26, of Atmore, was identified as the suspect by tipsters. Investigators learned that Harrison had an active probation of violation warrant with the Escambia County (Ala.) Sheriff’s Office and may have left town.”

McMann said on Sept. 27, APD investigators learned that Harrison may be back in town and requested patrol officers be on the lookout for Harrison and to take him into custody if located.

“Harrison was involved in a trespassing complaint approximately three hours later,” McMann said. “While searching Harrison, the officer discovered a clear glass pipe with a crystal-like residue in it that field tested positive for methamphetamine. In addition to the warrant, Harrison was charged with possession of a controlled substance and possession of drug paraphernalia.”

McMann said an investigator then interviewed Harrison at the Escambia County Detention Center in Brewton on Sept. 28.

Harrison has also been charged with three counts of unlawful breaking and entering a motor vehicle and theft of property I in reference to Lee’s Collision.