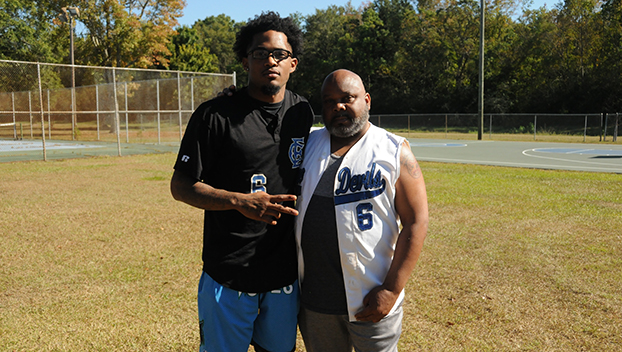 A Fun Day Peace event was held Oct. 15 at Houston Avery Park in memory and honor of Anthony Matthews Jr.

Matthews was found dead in Shorter on Sept. 14, and soon afterward, an arrest was made in connection to the homicide, according to reports.

“He harmed no one,” Knight said. “He was a good spirit. He believed in smiling, and having a great time. For him to have that happen to him, and how it did when it did, it’s just more than devastating. He didn’t deserve it. I feel like he’ll give us a big smile on us on how the event turns out.”

Knight grew up with Matthews. Both lived around the corner from each other. Knight lived on Adams Street, and Matthews lived on Martin Luther King Avenue.

Knight said they played baseball together while young, and that Matthews was full of energy.

“He smiled all of the time,” Knight said as his face lights up. “He was a great person.”

Knight said a special memory he always will have of Matthews is when his friend helped him lead his T-ball team to a city league championship.

“After that, he worked with my son virtually as well with is swing,” Knight said. “He (Matthews) played longer than I did and better than I was. My son was a first-year All-Star because of him.”

Knight said Matthews knew the game of baseball because of his father, Anthony Sr.

“He actually played JV ball in seventh grade,” Anthony Sr. said. “He went to several college camps at AUM, Alabama State University and to a camp in Georgia.”

Knight said faith was a big part of Matthews’ life.

“Still to this day, he knew what he could be,” Knight said. “It’s just unfortunate this had to happen. We were getting closer, but we drifted a part because of life. But, it’s like God brought us back closer before his passing. It’s weird how it happened.”

Knight said he’s hoping to make the peace day event an annual thing to help keep peace around, and to keep the community fresh on the opportunity.

“I just feel AJ would be proud,” he said.