An Monroeville man was arrested a second time on Oct. 18 on escape and criminal mischief charges, according to the Atmore Police Department. 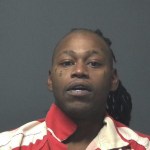 Public Information Officer Sgt. Darrell McMann said in a release that Savon Hurst, 27, of Monroeville, was arrested and charged with escape III and criminal mischief II after allegedly trying to escape through a hospital bathroom ceiling tile.

McMann said Hurst was transported from the Atmore Municipal Jail to Atmore Community Hospital due to medical issues. He was originally arrested on Oct. 16 in reference to domestic violence and theft charges. Hurst complained of headaches and an upset stomach, McMann said.

“While in the emergency room, Hurst requested to use the restroom,” McMann said. “The Atmore police officer guarding him escorted him to the restroom and waited outside the door.

“After Hurst was in the restroom for several minutes the officers heard items striking the floor in the restroom,” he said. “The officer entered the bathroom and found that Hurst had removed the ceiling tiles and was attempting to escape through the ceiling. Hurst was quickly taken into custody and charged with escape III and criminal mischief II.”