An Atmore woman was arrested and charged with elder abuse and exploitation charges on Oct. 24, according to the Atmore Police Department. 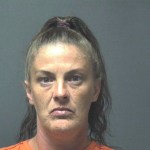 Public Information Officer Sgt. Darrell McMann said in a release that Shelley Lafever, 39, of Atmore, was charged with financial exploitation of the elderly, forgery III, fraudulent use of a credit/debit card and elder abuse and neglect III.

McMann said the arrest stemmed when an elderly victim came to the APD on Oct. 18 to report that her daughter, Lafever, had allegedly used her debit card numerous times without permission.

“The victim was contacted by an investigator and it was discovered that Lafever had used the debit in excess of 25 times without permission,” McMann said. “Several checks were also forged by Lafever over the course of a few months.”

McMann said the victim feared for her safety and moved from the residence.

“After speaking with the victim, the investigator discovered the victim suffered severe emotional distress in reference to the declining condition of the residence and the emotional trauma created by Lafever,” he said. “

McMann said arrest warrants were signed on Lafever, and she was arrested on Oct. 24, and transported to the Escambia County Detention Center in Brewton.