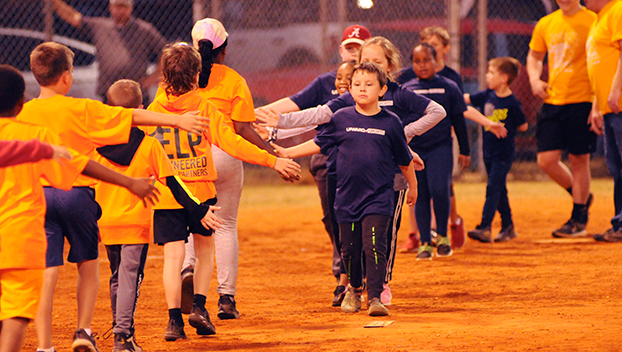 For the kickball season, the program had 70 participants and 27 volunteers. Boys and girls ages K-4 to sixth grade played on eight teams across three divisions.

“We had a good season,” Grace Fellowship Youth Pastor Jonathan McMath said. “I’m very appreciative for Mayor (Jim) Staff, the city of Atmore and Murray Johnson for allowing us to be able to use the city parks. We’re very, very appreciative.

“Without them, we couldn’t have done this,” McMath said. “Anytime we needed to be out here, they were more than willing to let us use the lights.”

For the season, there were 12 games, or meetings, held. McMath said the knowledge gained of game situations grew as the season progressed.

“From meeting one to meeting four to meeting eight, and then (Oct. 27), I’ve found they really learned how to play the game,” he said.

McMath said the program has gotten a good response from parents.

“In fact, we had a number of people sign up after our registrations were over,” he said. “Because they just saw that these kids were having fun and decided I want this for my kids.”

Coming up in the spring, Upward Sports will hold a flag football and cheerleading season.

McMath said sign ups for flag football and cheerleading will be held in February at www.gracefellowshipatmore.com.

McMath said the program is an opportunity for kids to do something as an alternative, added that it’s not meant to compete with the other sports being held during their respective seasons.

“We’re just trying to give the kids something to do since the YMCA shut down,” he said.